This is the second posting where I write with wistful envy about a person who was rich enough to build up an art collection and who had enough taste to build up a great art collection. The first posting was about Ms. Kröller-Müller, whose museum we will visit in a few weeks’ time when we go to the Netherlands. This second posting is about Ms. Heidi Horten, a selection of whose collection my wife and I recently visited at Vienna’s Leopold Museum. (In passing, Mr and Mrs Leopold are another couple who used their riches to build up a ravishing collection now housed in this same museum.)

A few words about Ms Horten. As a 19 year-old, this Austrian girl married the much older Mr Helmut Horten, a German who had made his fortune after the war with a chain of department stores (I will skitter delicately over the fact that the start of his business empire was his purchase – I would assume on the cheap – of a department store owned by two Jewish partners who were forced to give it up in the wake of the Nazis’ antisemitic policies and prior to their emigration to the US). Here, we have the Horten couple.

As a couple, they did some collecting but nothing major. The serious collecting only really started when Mr Horten went the way of all flesh in 1987 and Ms Horten inherited the bulk of his fortune – some $ 1 billion, it is reported. Here is a photo of her in those years: quite a glamorous lady, I would say. 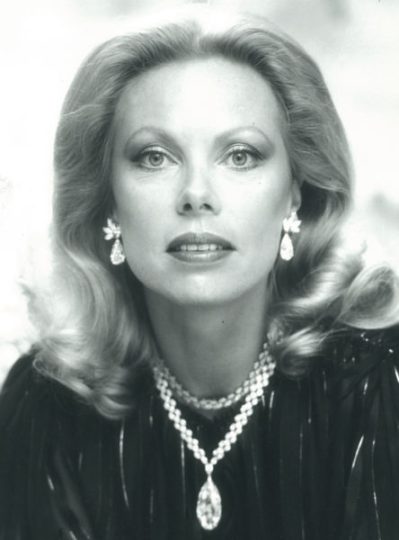 And what a collection Ms Horten has amassed! Like Ms Kröller-Müller and the Leopolds, she has focused her purchases on modern and contemporary art. I presume that the exhibition at the Leopold Museum is only a portion of her collection, but what they are showing is impressive. After doing a round of the exhibition, I went around again, taking pictures of the pieces which had particularly struck me. I post them below, in the order of their creation.

Lyonel Feininger’s The Honeymooners, from 1908.

Wonderful expression of the happiness of two honeymooners, dressed in bright clothes and towering over their surroundings.

Egon Schiele’s aquarelle of Seated Male Nude from Behind, painted in 1910.

Schiele painted a whole series of these aquarelles, a number of which I was fortunate enough to see several years ago on one of my periodic visits back to Vienna from China.

My wife was particularly struck by the painting’s dark, dark sea.

Gustav Klimt’s Church in Unterach am Attersee, painted in 1916. 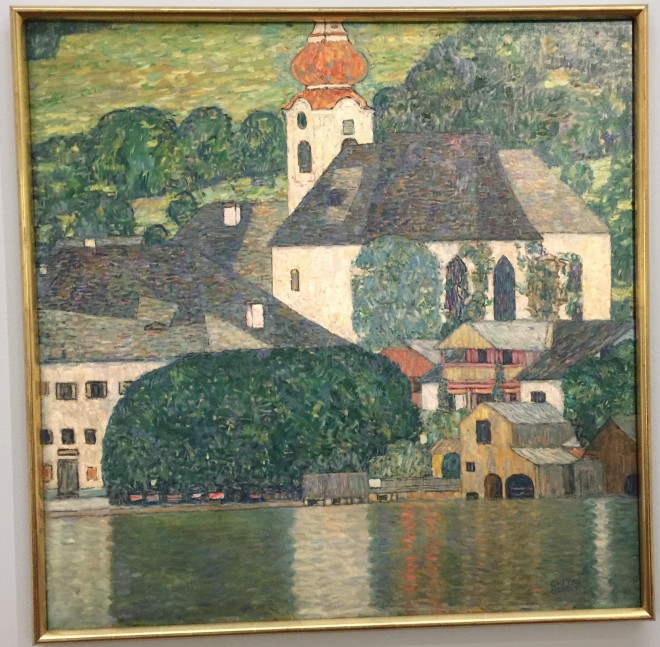 Klimt painted a number of these views, which he saw, it is said, through a telescope to get that foreshortening effect. 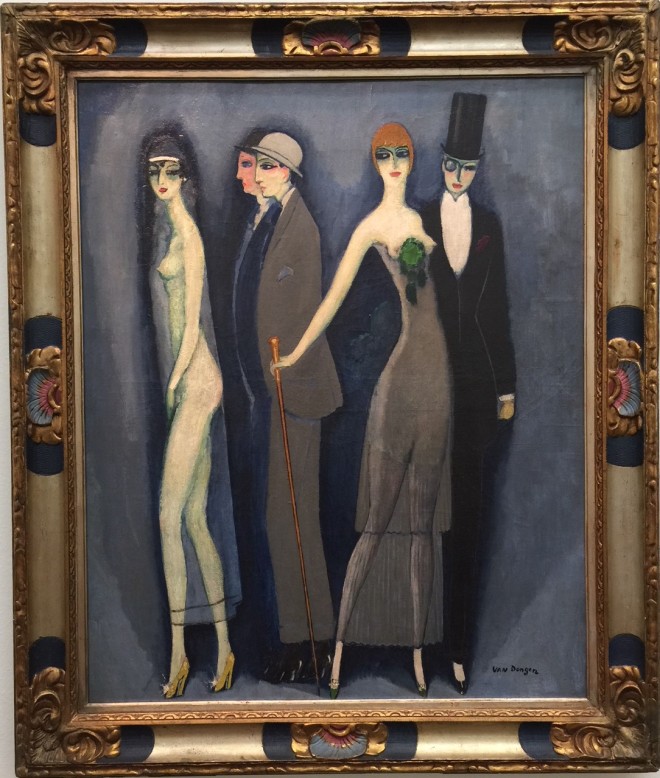 Soutine captured perfectly the sour look which all the French doorkeepers of my youth constantly displayed.

After that, things begin to get grim. I’ve often complained (the latest time last December) that as Western modern art gets ever more modern it slips off into irrelevance and silliness. I feel that the rest of the exhibition demonstrates this pattern all too well. Nevertheless, I show here pictures of some of these later pieces, often for no better reason than they amused me.

Alexander Calder’s Untitled (Toy Train) from around 1946. A fine way to reuse old tins and cans.

Michelangelo Pistoletto’s Nurse and Girl from 1965.

What, I wonder, were the two discussing?

As I’ve commented elsewhere, among the dreariness of abstract art Picasso shines out as having stayed true to representational art.

Another Alexander Calder, Critter with Peaked Head, from 1974.

Funny title, and interesting change of view as one goes around the critter and as one of her three legs disappears (I assume the critter is feminine since she is wearing high heels; but perhaps male critters also wear heels). 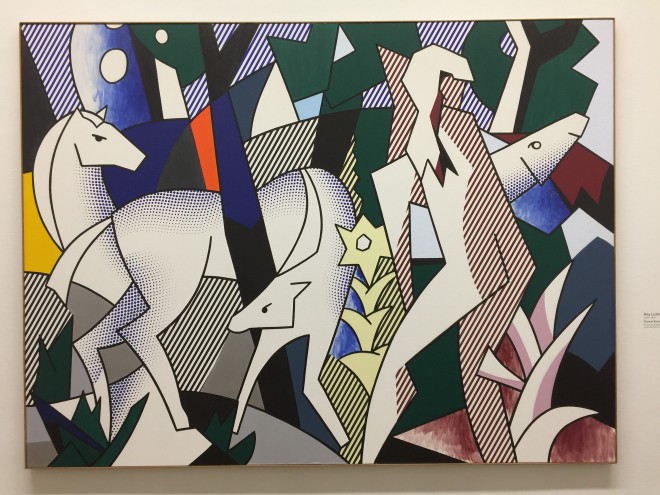 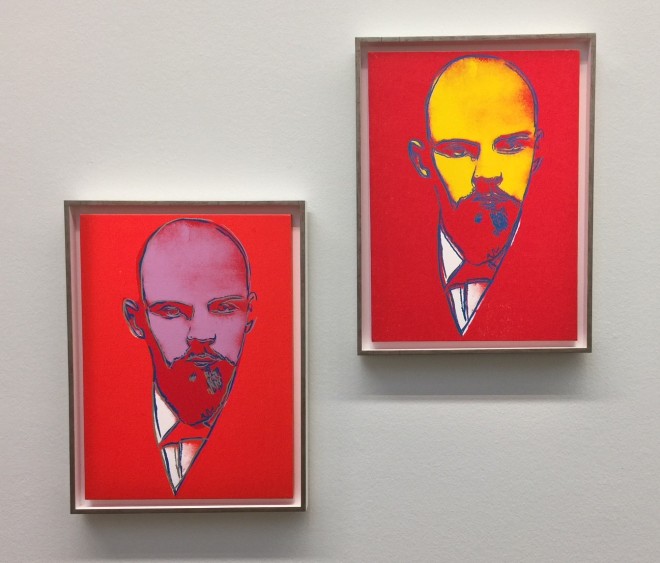 Normally, I find Warhol’s portraits wearisome and repetitive, but I found these two portraits of Lenin quite arresting.

Untitled, but I presume a commentary on the AIDS epidemic that was then sweeping through the US’s gay community and which counted him as one of its victims four years after he completed this painting. 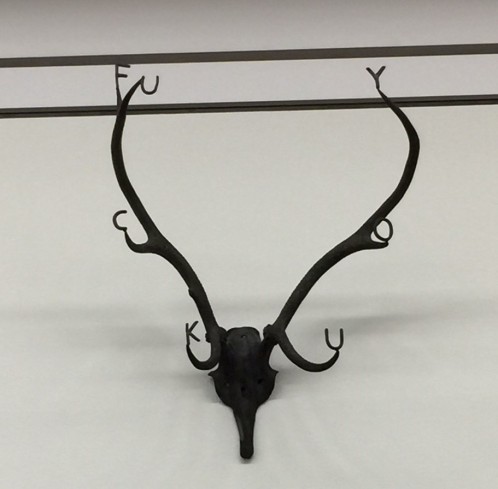 I don’t know if this is what Vital intended, but I see this piece as a commentary on those awful collections of deer antlers which you see in many conservative Austrian homes, testimony to the enthusiasm with which the home owner and his ancestors have hunted deer.

If I were a deer, I too would want to have those seven letters dangling from my horns as I faced my hunter.

I’m assuming that Cattelan was taking the piss out of Lucio Fontana, he of the cut canvases. I feel this ever more strongly given that this painting was hung beside some four or five Fontanas. 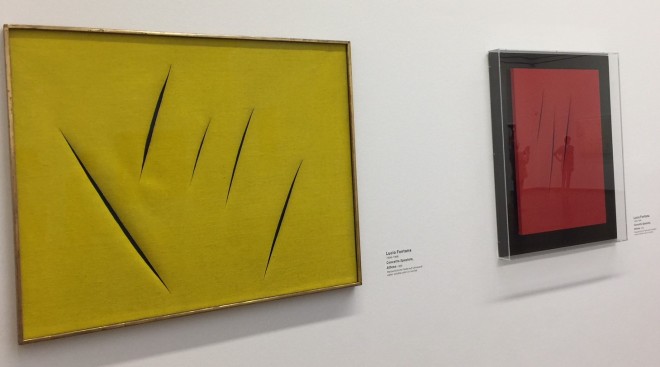 Cattelan, by the way, is the same artist who sculpted that hand with its finger raised in front of Milan’s stock exchange; it was the subject of an earlier posting of mine. He seems to be quite a joker.

I don’t know what Mr. Wurm is trying to tell us, it just looks amusing.

I now invite my readers to scroll through all these pictures again. Did something not go wrong with the art we produced in the developed countries some time after the Second World War? Is all that’s left to our art is whether it’s a good joke or not?