I was 13 when I started wearing jackets. They were part of our school uniform. I shucked them off when I went to University, along with many other habits both material and spiritual, but in the case of jackets it was a brief reprieve. Once I entered the workforce, it was back to wearing jackets. I suffered at first but now I don’t mind anymore. Whenever I see my wife rummaging around in her bag muttering under her breath that she could swear she put it in (“it” being any number of things) and where on earth was it?, I thank Fate that men wear jackets. Because to me jackets have become the equivalent of a handbag, except that contrary to handbags the pockets are all handily separated. This makes it so much easier to retrieve my stuff: mobile phone in the left-hand external pocket, packet of paper handkerchiefs in the right-hand external pocket, glasses and computer stick (you never know when you might need to copy a document) in the inside left-hand pocket, passport and pens in the inside right-hand pocket, clip-ons in the breast pocket, business cards in that little inside pocket down towards the left, from which you can fish out a card and present it to your interlocutor in one smooth, fluid, business-like movement.

This close relationship in my mind between the handbag and the jacket has meant that I am relatively insensitive to the sartorial aspects of jacket wearing. Frankly, I would just keep wearing the same jacket for ever if I could – such a nuisance to have to shift everything to the pockets of the new jacket! And having to make choices in the morning about what new jacket to wear, when really all I want to do is to go back to bed, is very tough. But luckily my wife is at hand to firmly guide me through the relatively frequent decision-making process of jacket-changing.

At this point, you would be excused if you thought that I am completely uninterested in jackets as fashion statements. But actually from time to time I have been able to appreciate a style in jackets. This happened, for instance, when we moved to Vienna. I noticed with great interest that many men wore jackets like this

Commonly called a Styrian jacket, its cut is a cross between the traditional gear which hunters wore in the Alpine valleys of the Austrian province of Styria

and early 19th Century military uniforms, which we see here (for reasons which will soon become apparent) being shown off by Archduke Johann of Austria, 13th child (no less) of Emperor Leopold II.

To my mind, the collar is what makes the Styrian jacket very distinctive, although as the last photo shows it has been reduced considerably compared to its military forebear.

Unfortunately, wearers of this type of jacket in Austria are normally making a strong social statement. They are usually advertising their conservative credentials, which is why many wearers are of the older generation: 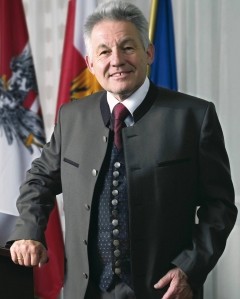 Although its distant roots are in the Styrian peasantry, the jacket’s recent pedigree is very aristocratic. It was brought from the Styrian farms to Vienna’s imperial court in the early 19th Century by the same Archduke Johann I just mentioned. Initially considered with suspicion by Crown and aristocracy (Archduke Johann was a tad too close to the people for them), it eventually caught on and was popularized (if that’s the word) by the Austrian upper classes and their hangers-on in the middle classes. Which is no doubt why Christopher Plummer’s Captain von Trapp  is shown wearing one in The Sound of Music

Wearing the jacket can also have strong political overtones, declaring the wearer’s oh-so Austrian credentials, a rampart against the sea of dubious Eastern European influence lapping up against the edges of the country’s pristine Alpine ranges. Which is why Jörg Haider, the far Right governor of the province of Carinthia, liked being seen in the Carinthian version of this jacket (the earth tones, the “good earth of Carinthia” is what makes the jacket specifically Carinthian).

But actually you don’t have to belong to the huntin’-and-shootin’ set, or want to make a political statement about smelly foreigners, to wear this jacket. To my mind, it works brilliantly well in more casual “modern” settings

where the somewhat militaristic cut of the jacket contrasts pleasingly with the relaxed style of the rest of the outfit.

I have one such Styrian jacket, a light summer one, but I left that behind in Vienna. I have another winter jacket with me in Beijing, which is actually a Bavarian Miesbacher jacket (so I suppose strictly speaking the title of this piece is wrong – but the Bavarians and the Austrians are very similar, even in their sartorial preferences, sharing as they do the same Alpine history).

The Chinese look at me curiously when I wear the jacket, and sometimes they ask me what it is. I explain, but I don’t think they really appreciate; I suppose you need to have seen an Alpine valley or two.

The interesting thing is that the Chinese, or rather the Manchu of the Qing imperial court, created a style which was a precursor for a similar jacket in the UK, where the collar is often called the Mandarin collar. This picture of Qing dignitaries nicely shows the collar in its original setting:

After the collision of East and West in China, with the West coming out on top, this traditional dress morphed into a jacket, in response to the “modern” forms of Western wear invading China. It is commonly thought that Mao Zedong popularized the new style – and in fact the collar is often referred to as a Mao collar – but actually it is to Sun Yat Sen, the first President of modern China and founder of the Kuomintang, that this honour should go: 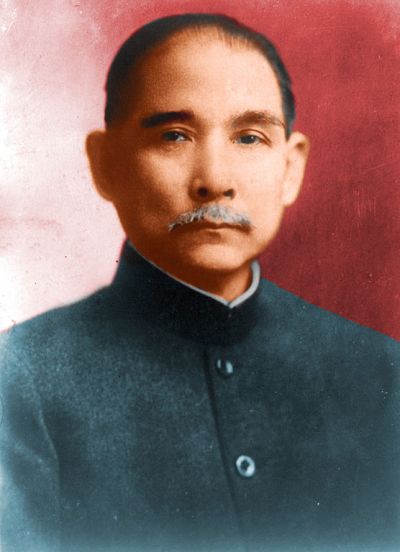 (which, as a trivial aside, I suppose must be the model for the jacket worn by Dr. No, the arch-evil adversary of James Bond in the 1962 film of the same name.)

This sartorial strand is somehow mixed up with another strand emanating from India. There, during the 1940s the Indians developed the Band Gale Ka Coat, Urdu for “Closed Neck Coat”, an apt name indeed.  This coat became a global star thanks to another leader, Jawaharlal Nehru, the first prime minister of modern, post-colonial India, who was often seen wearing a version of it.

All of this gave rise to the British variant of the “closed neck” jacket, the so-called Nehru jacket:

The interesting thing is that while the Austrian version of the jacket tends to be favoured by the right-wing elements of society, in its heyday – the Swinging Sixties – the British version was favoured by the left-wing elements, or at least the cooler, hipper set. Taking rock bands as a good indicator of all things cool, we have here a photo of The Who, where you will notice Roger Daltry wearing a Nehru jacket

while in this photo, we have – gasp! shriek! tearing of hair! – John and Paul of the Fab Four sporting Nehru jackets during a concert

Why, even in the US the Nehru jacket made its appearance among the modish set, as this ad with Sammy Davis Jr attests!

So with such stellar support I don’t suppose I can be very far off the mark in thinking that the closed neck style for a jacket is kinda nice. Nowadays, though, in the UK the style seems to be more in the purview of women, as shown by this photo from last year of Catherine Ashton at one of the many meetings she held with the-then Iranian negotiator on nuclear issues, Saeed Jalili: 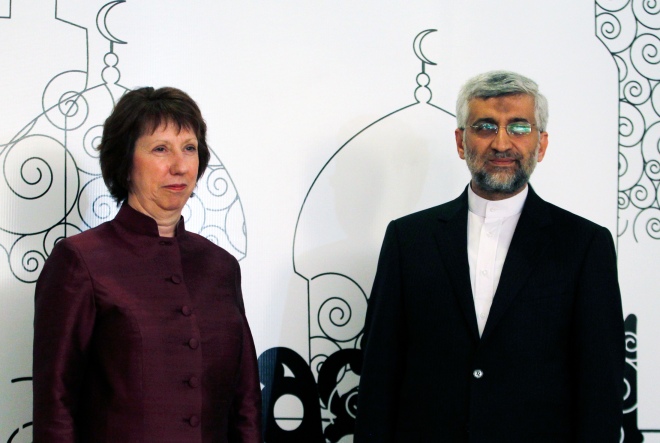 No matter. I will continue to beat my lonely path with my Bavarian jacket in China.

And I need to look into the shirt which Jalili is wearing. It’s pretty nifty, eliminating as it does the need for a tie, which is no bad thing. Another piece of clothing which I was required to start wearing, along with jackets, when I was 13 …