A week or so ago, my wife and I were at our place at the seaside near Genova; my next to last post was about one of the walks we did in the hills while we were there. One morning, being sore of leg from our walks and uncertain as to what walk to do next, we decided to go down into the village centre instead to have ourselves our morning cappuccino. Being in no hurry, we dawdled along looking in shop windows and at anything else that caught our attention. One such thing was the door of the local police station, which was festooned with various notices about Important Local Things. As I idly scanned the notices, one caught my attention in particular. It stated, in Italian of course, something to the effect that the part of the main road lying between km X and km Y was particularly risky for centaurs, and that the public authorities were devoting their attention to how to minimize the risks.

Puzzled, I turned to my wife to ask for elucidations, and she informed me that this was a term used in Italian to describe motorcyclists. What a wonderful idea! What, I wondered, had led an Italian at some point in recent history to make this connection? I mean, early motorcyclists didn’t really much look like centaurs, although with a bit of poetic fancy once could sort of see a human torso on top of a beast on wheels. 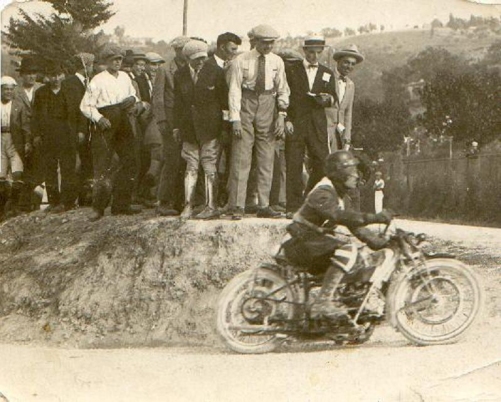 For once, the internet was not of great help. One thread suggested that it had to do with the huge amounts of horsepower in the engines, allowing the rider to roar off much as a horseman could gallop off. Another thread claimed it had to do with fanatical motorcyclists hardly ever getting off their bikes and thus being seemingly welded to them much as centaurs were human torsos welded to a horse’s body.

Of course, either or both of these explanations could be correct. I can think of another, which has to do with the Bad Boy reputation of both motorcyclists and centaurs. For most Ancient Greeks, who invented centaurs, these creatures were the epitome of barbarism. They were wild, lusty, overly indulgent drinkers and carousers, violent when intoxicated, and generally uncultured delinquents, living on the edges of the civilized world and needing to be kept under control. Greek myths were replete with stories of heroic warriors taking on centaurs and beating the shit out of them. Greek sculpture and painting naturally followed suit. Here, from a pediment of the temple of Zeus at Olympia, we have a representation of the story of the centaurs fighting with the Lapiths (a popular story in which centaurs are invited to a wedding, get drunk, and one of them tries to rape the bride, with – as may be expected – mayhem ensuing). The calm fellow in the middle is the god Apollo.

Here, we see the right hand part of the pediment showing more clearly the naughty centaur carrying off a woman and a noble Greek warrior about to make him pay for it. 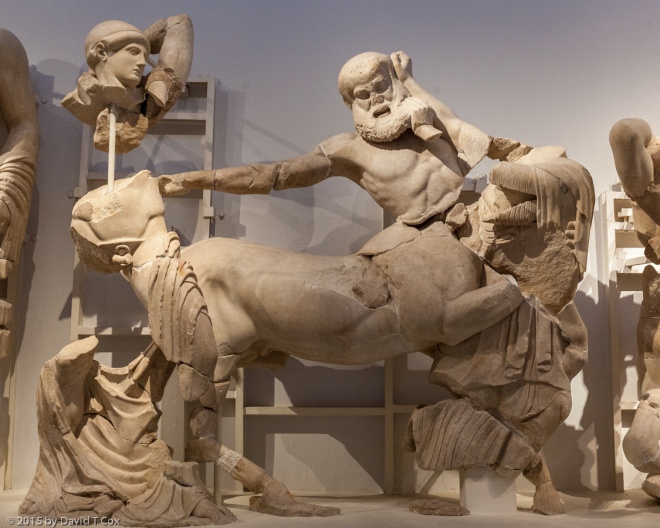 Here, to equal things up a bit, we have the same story from a frieze at the temple of Apollo in Bassae, with the centaur seemingly the one winning. 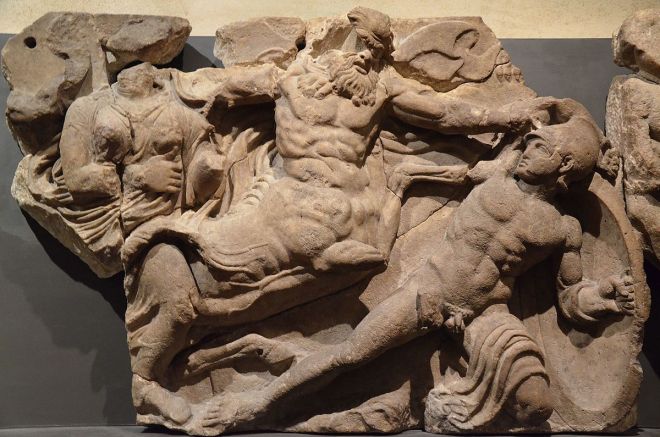 Here, we have a more humble piece of Ancient Greek art, a painting on a vase, showing the same story. 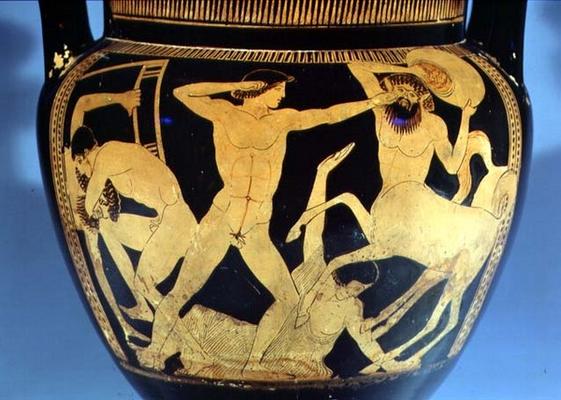 Here again, to equal things up, is a painting on another vase where the centaur seems to be besting his opponent. 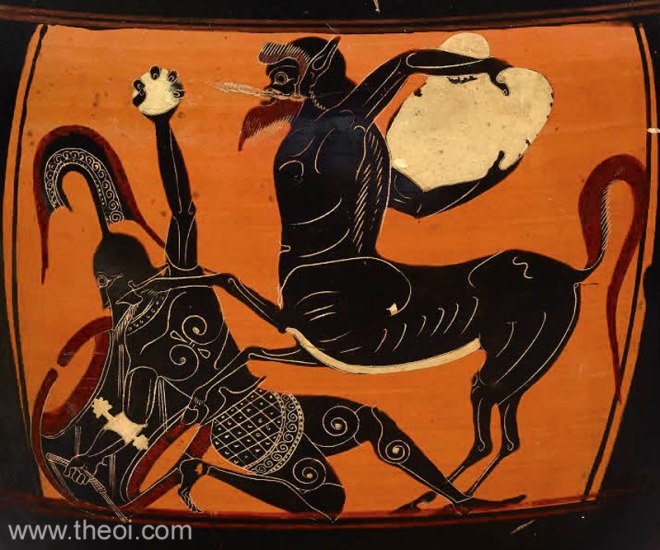 Just in case readers are thinking that the fight between centaurs and the Lapiths is the only Greek story about the centaurs, I throw in here a picture of a vase painting showing Hercules fighting with a centaur (the centaur was a certain Nessus, who carried away Hercules’s wife Deianeira, and Hercules killed him). 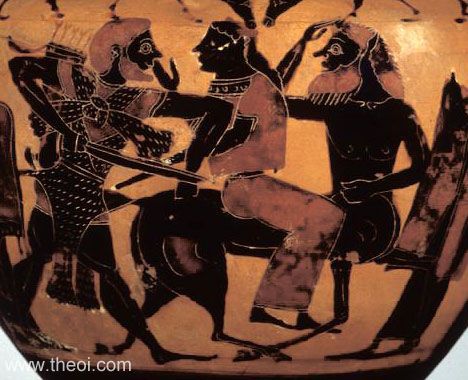 In any event, whatever the medium, I think we can all agree that the centaurs are made to look fairly rough types. The centaurs’ bad reputation and the need to beat the shit out of them pursued the poor beasts into the Roman period and on into Europe’s medieval period and beyond. This sculpture from the early 1800s by Antonio Canova greets us every time my wife and I climb up the grand staircase at Vienna’s Kunst Historisches Museum. It shows Theseus about to brain a centaur – for some reason, Theseus was at the Lapith wedding feast. 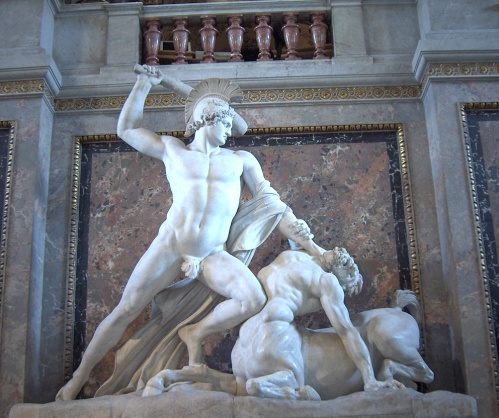 This sculpture, on the other hand, depicts Hercules about to brain Nessus. 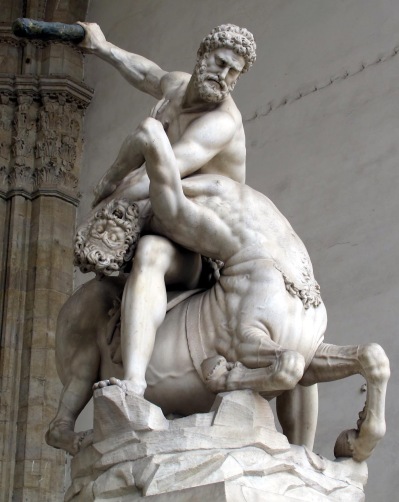 It was sculpted in 1599 by the Flemish Jean Boulogne, known to the world as Giambologna. It graces the Loggia dei Lanzi in Florence.

Painting also got into the act. Here, we have a painting by Sebastiano Ricci from 1705 showing the brawl at the Lapith wedding. 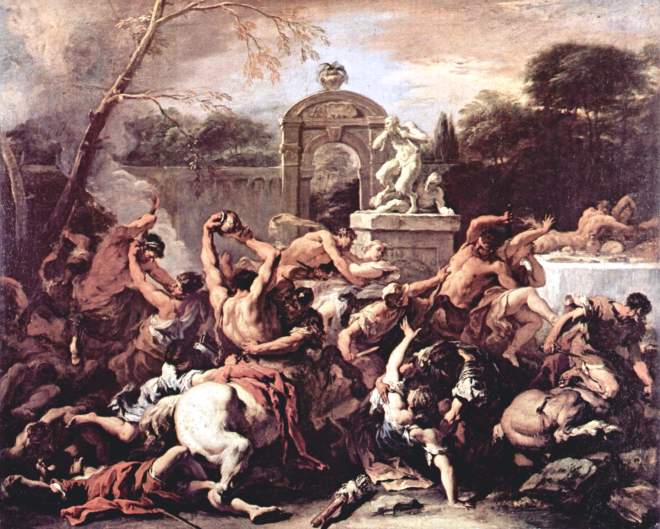 Perhaps some classics-loving Italian saw similarities between these badly behaved centaurs and the badly behaving modern bikers – at least as they were often represented in popular culture. Think of the 1953 film “The Wild One”, in which Marlon Brando is the leader of a motorcycle gang terrorizing a small town. 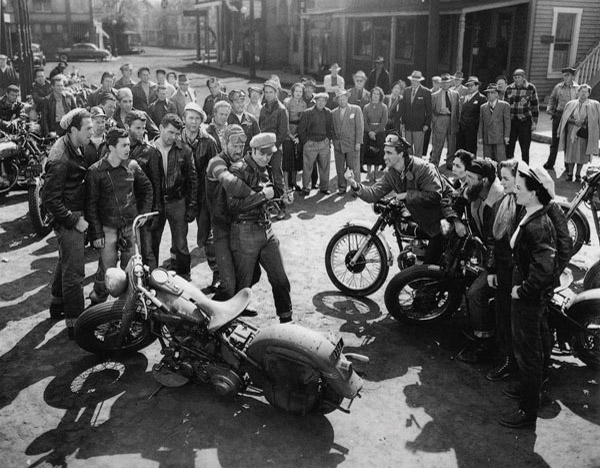 Or consider the 1966 film “The Wild Angels”, in which Peter Fonda is the nihilistic leader of a chapter of the Hell’s Angels causing mayhem in some small town. 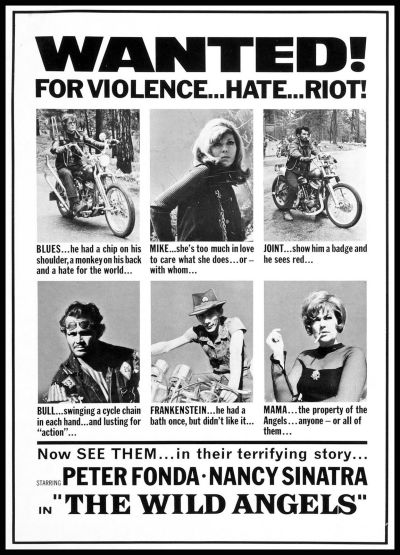 Or more extremely, we have the 1973 film “Psychomania”, where a gang of bikers kill themselves, only to become alive again as zombies and go around wreaking havoc on the living. 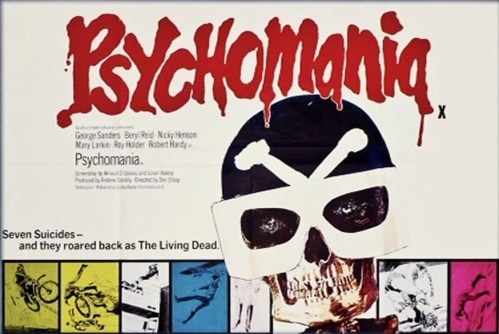 Personally, and without a shred of evidence to back me up, I prefer to think that the Italian who gave bikers the new title of centaurs made quite another connection between the two: the fact that both are gentle, peaceful souls. On the centaur side, there was a view, an admittedly minority view, in Classical times that centaurs – at least some of them – were wise and noble creatures. The centaur Chiron was particularly famous in this regard. It was said that he was so wise that had taught great heroes like Achilles, Ajax, and Jason. This fresco from Hercolaneum, destroyed like Pompeii by the eruption of Vesuvius in AD 79, shows him teaching Achilles how to play the lyre. 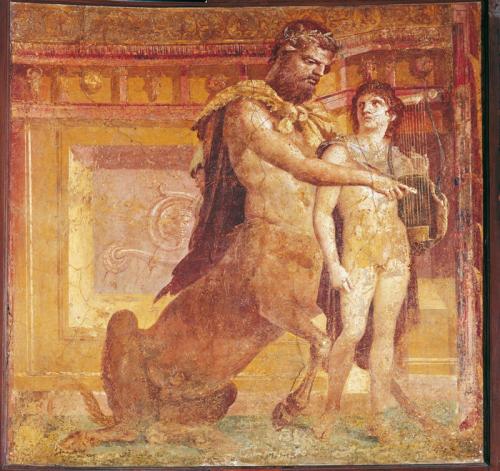 This strand of thinking which saw centaurs as wise and gentle beasts was taken up with enthusiasm by C.S. Lewis in his children’s books about Narnia, and it was in my reading of these books as a child that I first got to know of centaurs. I still remember with fondness the wise and noble centaurs which peppered the Narnia books. Here, for instance, is Roonwit, who graces the pages of “The Last Battle”, talking strategy with Prince Tirian and the unicorn Jewel. 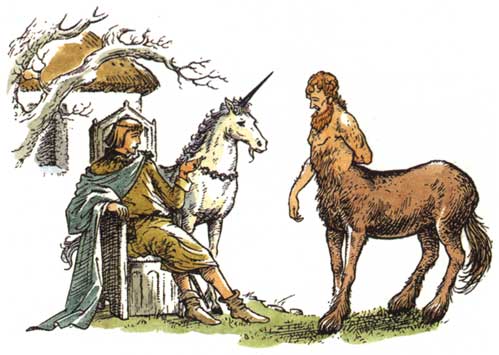 Given my age, I think it no shame to admit that I have never read any of the Harry Potter books (although I did accompany my daughter to a few of the films when she was young). I understand, though, that J.K. Rowling also included wise and gentle centaurs in her books (confirmed through WhatsApp by my daughter). This is the centaur Firenze with Harry in (I think) the Forbidden Forest.

As for bikers, there are those who argue forcefully for a gentle, peaceful, soulful side to motorcycling. Many is the motorcycling writer who has written lyrically about the joy of being out on the open road, with the wind in your hair and your thoughts your only company. My most recent read in this vein was Oliver Sack’s autobiography, “On The Move: A Life”, where he writes about the long motorcycle rides he took in the American West in his early days in California. Appropriately enough, the cover photo is the author on his beloved bike. 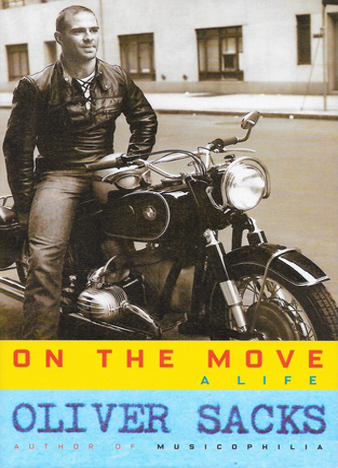 There is even a semi-serious book of philosophy, “Zen and the Art of Motorcycle Maintenance” which, according to Wikipedia, “is a fictionalized autobiography of a 17-day journey the narrator made on a motorcycle from Minnesota to Northern California along with his son. … The trip is punctuated by numerous philosophical discussions on topics including epistemology, ethical emotivism and the philosophy of science”. 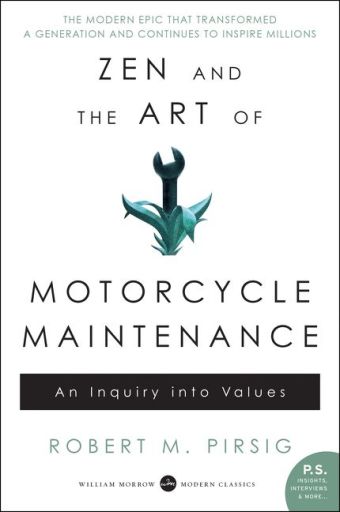 (I must confess that although I have started the book a couple of times I have never finished it).

Films, too, have played their part in depicting the lyrical side of motorbiking. We have the 1969 film “Easy Rider”, in which Peter Fonda stars once again, but this time accompanied by Dennis Hopper. The two set out from Los Angeles to New Orleans on Harley Davidsons to discover America (and get killed by rednecks in the process). 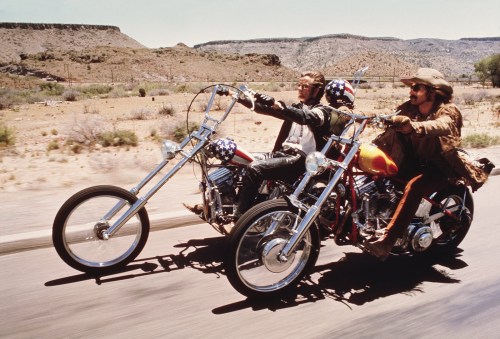 Or there is the 2004 film “The Motorcycle Diaries”, about the bike journey which Che Guevara and a friend made in the 1950s across Latin America, and which opened his eyes to the poverty, hardship, and political oppression experienced by many on that continent. 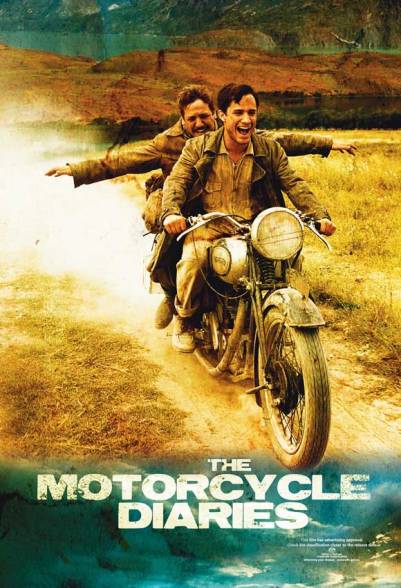 As I said, I have not a shred of evidence that gentleness, nobility, peacefulness, wisdom, etc. etc. were the common threads that some Italian of yesteryear saw between bikers and mythical centaurs. But it pleases my contrarian spirit for it to be so, and so it shall be.