One of the first things my wife and I did when we arrived in Beijing was to eat Peking Duck. Well, not quite the first thing. We waited until the children came a few months later to visit us at Christmas before trying this Beijing delicacy. It was worth the wait. We went to the Dadong restaurant, which in the meantime has grown exponentially into a chain of really quite swanky restaurants scattered throughout the city. 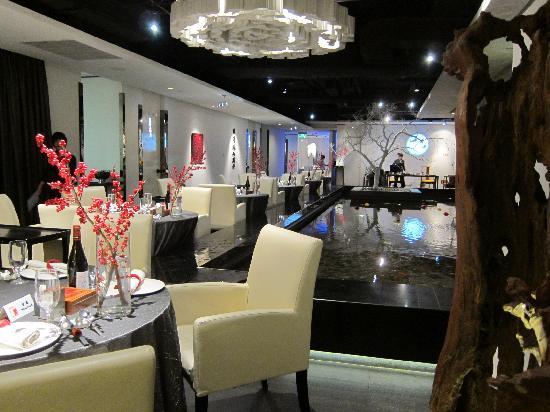 For readers who have not tried this dish, it presents itself so: 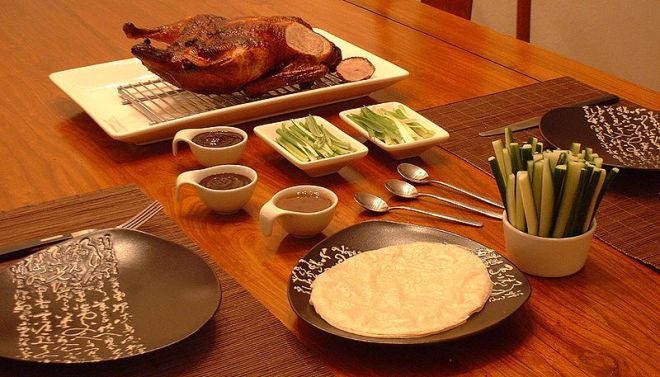 As you can see, we don’t just have duck. Many other ingredients are part of the package. Eating Peking Duck requires one to follow a certain, very specific procedure, to bring together all these ingredients in the right order. Allow me to walk readers through the Standard Operating Procedure (SOP) for eating Peking Duck.

1. Look on respectfully as a chef comes to your table and slices up the bird in front of you. 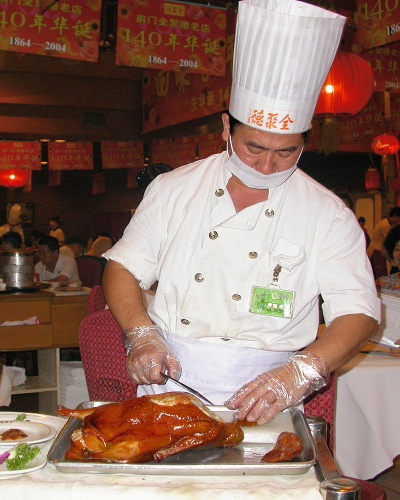 2. Start with the crispy skin. Take a piece or two, dip into sugar, and eat. 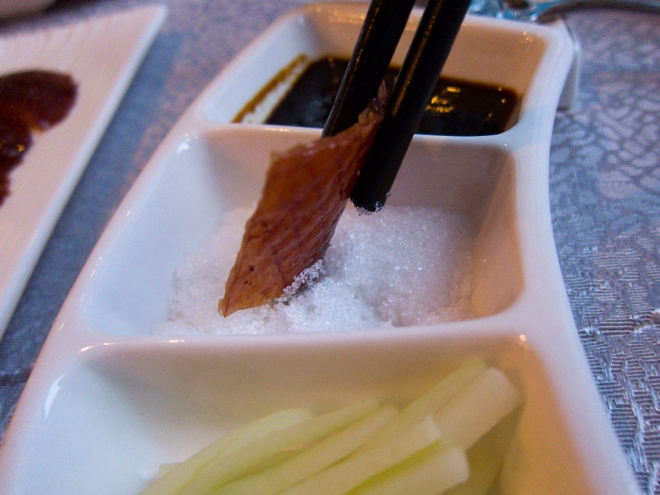 Personally, I find that one piece is enough for me; it’s just too fatty.

3. Start in on the duck meat proper. Pick up a wafer-thin circular crepe. For neophytes in the use of chopsticks, this can be an immense challenge. 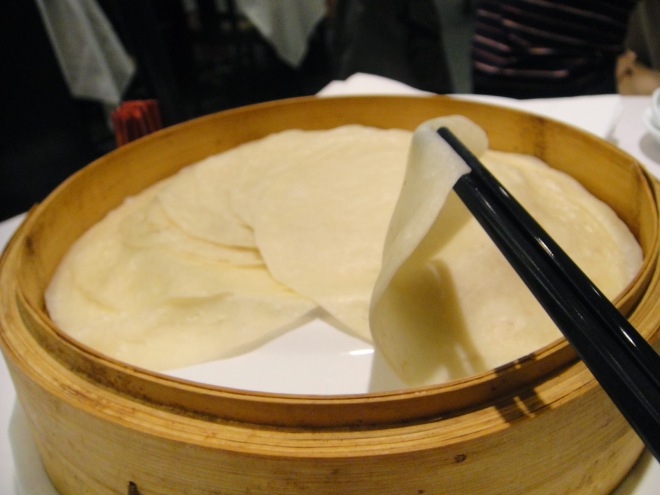 4. Use the chopsticks to smear dollops of the various sauces onto the bread wrap. The usual menu of sauces include sweet bean sauce or hoisin sauce, which is a thick, pungent sauce usually including soy, red chilies, garlic, vinegar and sugar. 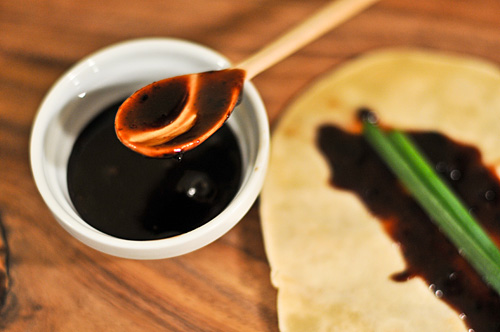 5. Place the slices of roast duck on the bed of sauce. A mix of crackling skin and meat is the optimal choice. More sauce can be smeared on the meat if so desired. Place on top of the duck a couple of thinly sliced scallions. 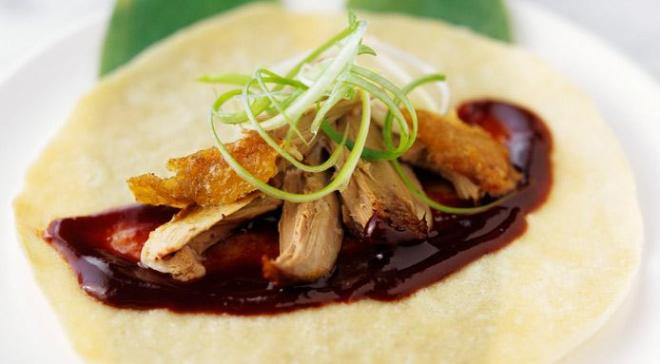 Various other ingredients can also be added: thinly chopped cucumber is popular, at Dadon they also offer thinly chopped melon and some other stuff whose identity is a mystery. 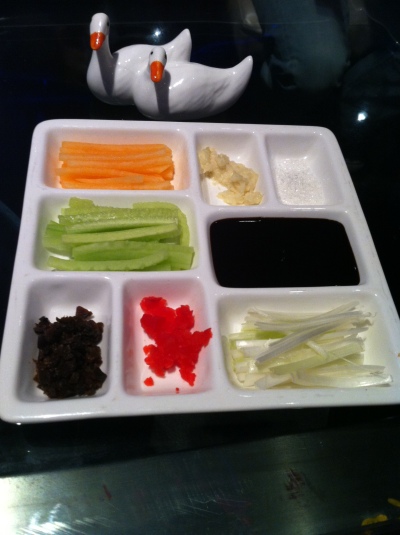 6. Roll the whole into a tubular sandwich. 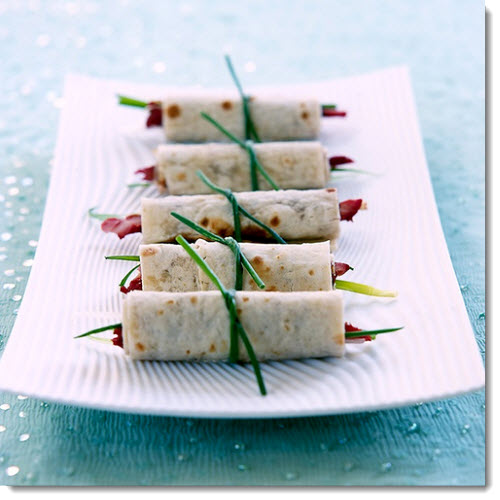 These look far fancier than the ones I produce. It’s rather like comparing the product of someone who has spent a life rolling his own cigarettes to that of the fellow who is just starting out in this bad habit.

7. Eat, making loud noises of appreciation if you have been invited by Chinese hosts, who are always glad to know that you’re liking it.

8. Repeat from step 3 (or step 2 if you have a mind to), making small variations if you wish, until all the duck has been consumed.

9. As a finale, slurp down the duck soup which they will bring, made with all the leftovers of the carved ducks. 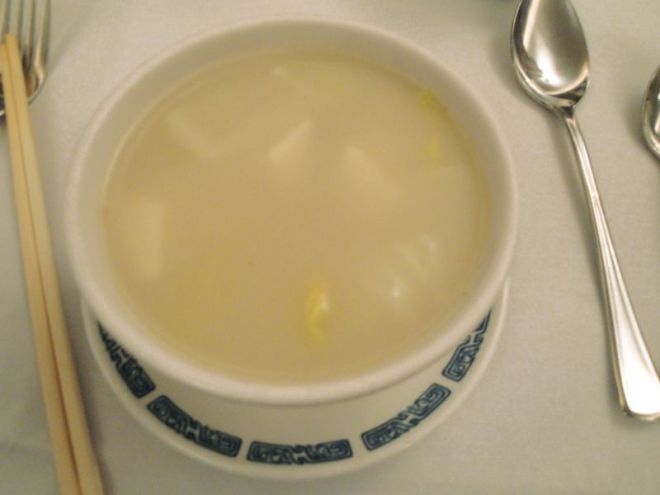 This must really be one of the most Chinese of dishes. Some even call it China’s national dish (I’m not sure what the Cantonese think of that, but we’ll let it pass).

So it’s a bit of a shock to know that the ducks consumed in China aren’t all that Chinese.

I was informed of this fact last week during a talk in Shanghai by a very respected Academician, who revealed to the stunned audience the whole sorry story.

There was a time, before 1873, when the duck was Chinese. It had evolved and prospered on the Grand Canal, where it had grown fat on the grain that fell off the barges going north towards the capital. The Chinese, never ones to leave anything go to waste, had recycled this lost grain by domesticating the ducks and eating them. In Beijing, the SOP described above evolved as the way to consume the ducks. This culture of duck rearing was beautifully captured in the children’s book The Story about Ping, which I loved to read to my children (although I don’t know if they loved hearing me read it …) 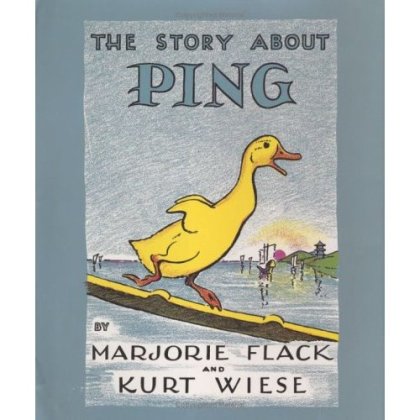 Then, in 1873, 25 of these Pekin ducks (note: no final g on Pekin) were exported to Long Island – most of them didn’t make it, eaten no doubt by the hungry voyagers on the same ship as them. The few that made it through went on to become the progenitors of the most successful domesticated breed of duck in Europe and the US. Those nice white ducks waddling around the farmyards of my youth were in all probability children of Chinese immigrants. 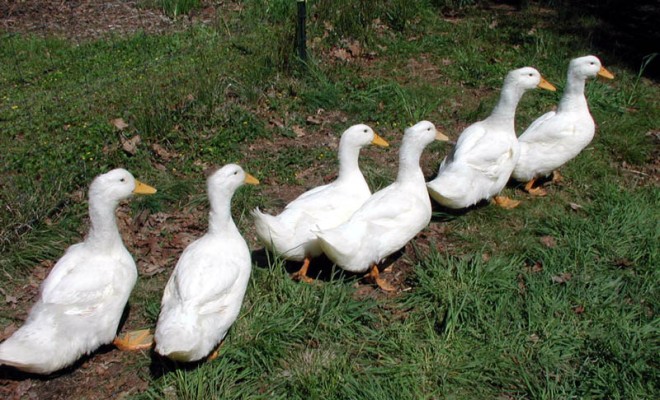 Except that European and American farmers and agronomists were not content with just taking this Chinese duck and breeding it. They started playing with its DNA through selective breeding to make bigger, fatter, and I know not what.

In the meantime, the Chinese had slipped into anarchy, had been eviscerated by the war imposed on them by the Japanese, and – after the Revolution and the creation of the new China – had gone through the disasters of the Great Leap Forward and Cultural Revolution. So by the time the 1970s rolled in, the original Pekin Duck and its rearing were in as sorry a state as the rest of the country.

Well, the economy picked up and so did the Chinese appetite for Peking Duck. But for some reason, national production remained stagnant, or at least didn’t grow as fast. The result was that China, the biggest exporting country in the world, began to import the Pekin Ducks to turn into Peking Ducks. And began to import them in vast quantities. According to the Respected Academician in Shanghai, 70% of the Peking Ducks which are consumed in China were born and bred … in the UK. In fact, for the most part they come from one farm in Lincolnshire, the Cherry Valley Farm. 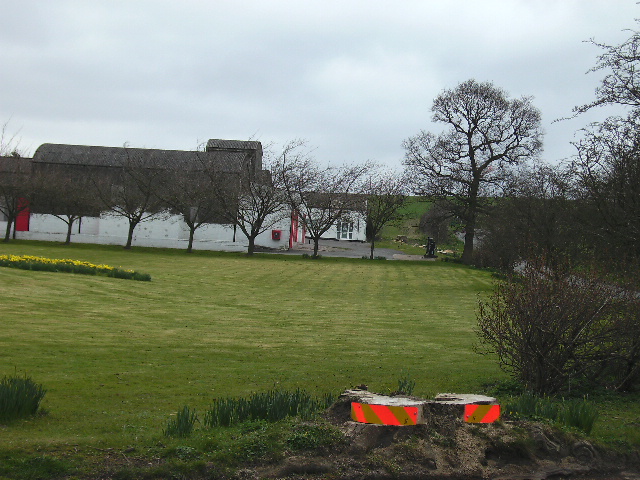 Unbelievable. It’s the opium wars all over again, except that this time the UK is flooding China with Pekin Ducks …