The police barred their way as the marchers tried to leave Largo La Foppa, the temperature was mounting, and at some point the police charged – or maybe the marchers charged, or pushed forward. Anyway, the police started wielding their batons, while the marchers protected themselves, somewhat bizzarely, with inflatable boats – taken to remind the world of the plight of the refugees, according to the newspapers, but it seems to me also an excellent way of protecting oneself from the police batons. 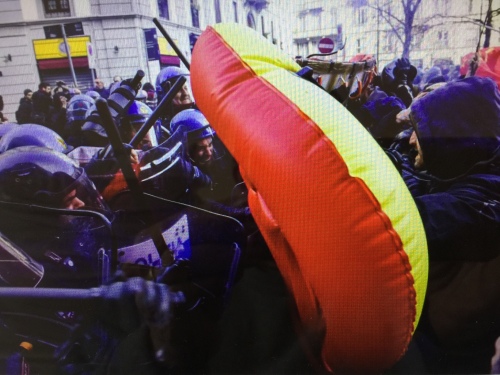 At the same time, the police shot off a couple of canisters of tear gas, that white smoke one sees behind the marchers. 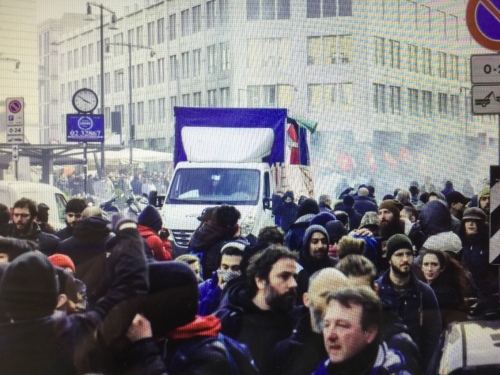 Meanwhile, my wife and I were sitting down having tea and cannoncini (a puff pastry stuffed with vanilla cream) under those large white umbrellas one can see to the left in this last photo. We were there quite by chance, being on our way to see Daniel Day-Lewis in his last film, “The Phantom Thread”. We were early and those large umbrellas belong to a good pastry shop, so we decided to treat ourselves. We made our way round what seemed to us quite a small crowd (the papers talk of 1,500 but in my opinion it was no more than 200), got our tea and canoncini, and sat down. It was fun to watch all the flag waving going on in front of us and reminisce about our youth. Suddenly, the noise levels rose, there were sounds of shots, and two little smoking canisters landed almost at our feet. My wife, a veteran of Milan’s 1968 riots, leaped up in alarm and urged me to move. But I saw no need for panic, I thought they were crackers thrown by some of the marchers. I rapidly changed my mind when I breathed in the smoke. It immediately caught you terribly in the throat and made your eyes burn and weep. This was tear gas, for God’s sake!! I grabbed my cup of tea and the remainder of my cannoncino and shouted to my wife to move. Together with other customers, we blundered into the pastry shop and stood there gasping and wheezing and coughing. According to my wife, who had had a whiff or two of tear gas in her youth, technology has improved in the last fifty years; she didn’t remember it catching you so strongly in the throat. I wouldn’t know, this was my first exposure to the stuff. Eventually, we were shepherded out to a back yard, from which we exited into a side street and made our escape to the cinema.

All this excitement has led me to reminisce about marches and protests in the arts. The most well-known painting on the topic of marches must be Giuseppe Pellizza da Volpedo’s “The Fourth Estate”, which gives the working man a wonderful dignity 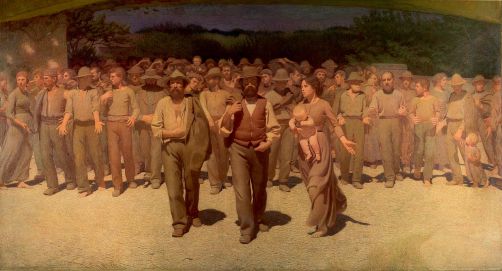 while “Liberty Guiding the People”, by Eugène Delacroix, must be the most famous painting on the topic of insurrections, in this case the insurrections of 1848.

Once the October Revolution rolled around, revolution and the working class became respectable subjects of art. Staying with marches, where I started this post, we have, for example, “The Bolshevik”, by Boris Kustodiev.

The Chinese picked up on the art form with a vengeance. They made some great paintings, which I mentioned in an earlier post about a new museum we visited in Shanghai, but their propaganda art was fantastic. Here’s one with the Chinese people walking towards a bright future.

The caption declares: “Smash the imperialist war conspiracy, forge ahead courageously to build our peaceful and happy life!” Change that to “the 1%” and we have a message for our times …

I have to say, though, I always preferred the type of Chinese propaganda poster which has smiling, muscular workers:

The North Koreans were still making these type of poster when I made an official visit there with my wife in 2009. We asked if they could give us a copy of one of these posters, but the best they could come up with was one urging people to wash their hands to reduce the spread of illnesses… 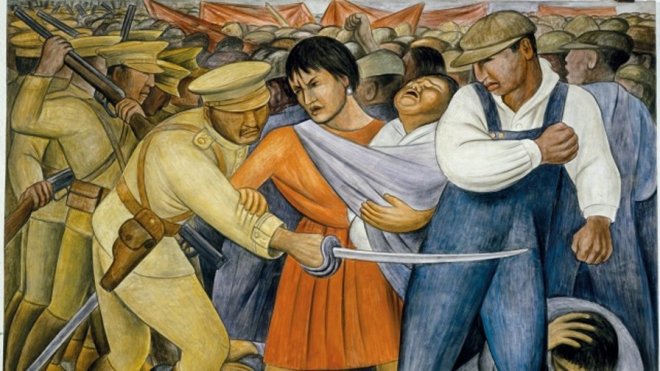 and this is his “Distribution of Arms”

I posted photos of some of his other revolutionary murals earlier, after our last visit to Mexico.

Wonderful stuff. But who paints it anymore? Revolution is out of fashion, at least for the moment.

Ah well … In the meantime, we will be passing through Largo La Foppa again today, to go and see another film. That gives my wife the opportunity to have another cannoncino; while I saved mine, hers got lost in the confusion of running away from the tear gas.