There is a small street which gives on to Piazza Duomo in Milan, which goes by the name of via Santa Radegonda. It’s a very modest, narrow, little street, really quite boring. Its main claim to fame is that it runs alongside the posh department store La Rinascente.

But I like the street, for the quite frivolous reason that I like the name. Radegonda, Radegund in the original German: now that’s a girl’s name with some whoomph to it! Not like Amelia, or Olivia, or Emily, which are currently some of the most popular names for little British girls.

This particular Radegund was a 6th Century princess from Thuringia, in what is now central Germany. Her life story was as colourful as her name. Her father, Berachtar, was one of three kings in Thuringia. Her uncle, Hermanfrid, one of the other Thuringian kings, killed her father in battle, took over his part of the Thuringian lands, and while he was at it took Radegund into his household. Hermanfrid then made a deal with the Frankish king, Theuderic, to share sovereignty of the whole of Thuringia, subject to material aid from Theuderic. Having sealed the deal, Hermanfrid attacked, defeated, and killed the third king of Thuringia, his brother Baderic. He then promptly reneged on his agreement with Theuderic. Not surprisingly, Theuderic sought revenge of this perfidy. Together with his brother Chlothar, he defeated Hermanfrid and took over Thuringia. In the ensuing carve-up, Clothar took charge of Radegund and brought her back to Gaul. All this happened before Radegund was 11, by the way.

Clothar packed Radegund off to one of his villas until she was of a more marriageable age. When she was 19 or so, he married her himself. No doubt it made his claims to Thuringia stronger to have her as his wife. She joined Clothar’s five other wives – Guntheuca, Chunsina, Ingund, Aregund, and Wuldetrada – in what may, or may not, have been a cozy concubinage. In any event, she bore Clothar no children.

By the time Radegund was 30, her only remaining brother was the last surviving male member of the Thuringian royal family. Presumably to head off any pesky competing claims to the Thuringian lands, Clothar had him murdered. At which point, either because she feared for her own life or because she was fed up with all this mayhem, Radegund fled and sought the protection of the Church, eventually founding, when she was about 40, a nunnery in Poitiers. Initially, Clothar tried to get her back but eventually left her alone and focused on expanding his lands at the expense of all those around him, including his brothers (although he had the grace not to kill them to obtain his ends, good manners which did not extend to their sons). By the time he died, he was master of a kingdom stretching from the Pyrenees to Thuringia, and from Brittany to French-speaking Switzerland.

All these Franks and Thuringians may have been a lying, traitorous, murderous lot, but they had wonderful names. This all rather reminds me of my Favourite History Book, 1066 And All That, my copy of which recently came to light, among many a delighted cry on my part, from the storage box in which it has been lying these last seven years.

In that book, we are reminded that Anglo-Saxon England was peopled with persons carrying wonderful names:

Soon after this event Egg-Kings were found on the thrones of all these kingdoms, such as Eggberd, Eggbreth, Eggfroth, etc. None of them, however, succeeded in becoming memorable except in so far as it is difficult to forget such names as Eggbirth, Eggbred, Eggbeard, Eggfish, etc. Nor is it even remembered by what kind of Eggdeath they perished.”

The authors were exaggerating, but not by much.

The murderous goings-on around Radegund also remind me of that other Great Source of Early European History, Asterix. In the album Astérix chez les Goths

the endemic fighting among the Germanic tribes is well captured.

But I digress, and I think my wife feels I’m letting my childish side get the upper hand here. Let us focus on the saintly Radegund. Already when queen, she was noted for her almsgiving. Once a nun, she cared for the local lepers and other infirm of Poitiers. She was also known for eating nothing but legumes and green vegetables: no fish, no eggs, not even fruit. I’m sure the vegans of today would approve (although even they might find her decision to forswear fruit a trifle extreme) but to the meat-eating Germanic elites, who spent much of their time hunting, this must have been pretty weird. Here is the most ancient representation of this saintly lady that I found, from a 10th-11th Century manuscript in the Municipal library of Poitiers, where we see Radegund getting herself to the nunnery (to misquote Hamlet). 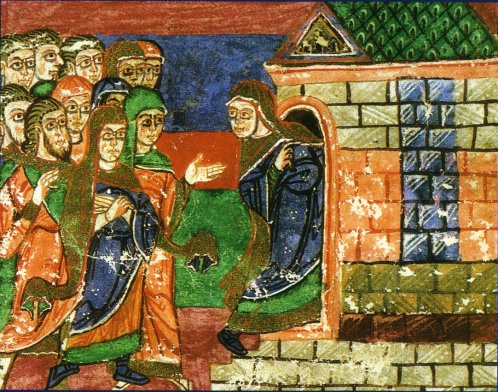 As far as I can make out, though, her main claim to religious fame, at least in the Dark and Middle Ages, is that the Byzantine Emperor Justin II gave her a fragment of the True Cross. I hasten to add that he did not do so because he was much taken by Radegund’s saintliness. It was, I’m afraid, a purely political maneuver. Justin wanted to wrest control of the north of Italy from the barbarian Lombards, but for this he needed the help of the (equally barbarian) Franks. The relic, given to an ex-wife of the Frankish king who, though, was still on friendly terms with said king, was the bribe, or, to put it more kindly, the bait. Whatever the reason, the relic which Justin handed over to Radegund was a Really Good relic, and any Medieval religious institution with a Really Good relic was sitting on a goldmine as the pilgrims poured in and spent their money locally. This no doubt was the happy fate of Poitiers, helped along by the fact that Radegund was widely believed to have the gift of healing. Indeed, several miracles around her tomb greatly helped to increase the pilgrim traffic. The result was the building of a church which is a combination of Romanesque and Angevin Gothic styles. 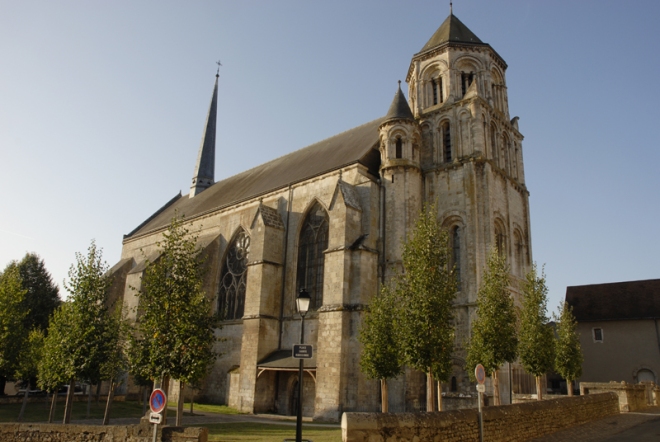 Sadly, the vicissitudes of history, and more specifically a sack by Huguenots in the 16th Century and the ravages of the French Revolution, combined with some heavy-handed restoration in the 19th Century, has scarred the original splendour.

The pilgrim traffic to Poitiers had the happy side-effect of carrying Radegund’s name far and wide as the pilgrims returned home, and new churches and other religious institutions sprang up all over Europe dedicated to her name. This was certainly the case in Milan, where on the site on which now stands that temple to consumerism, La Rinascente, there once stood a nunnery dedicated to Santa Radegonda. No trace of this nunnery remains today save in the name of that modest, narrow, little street which I like so much.

I give just one further example of the many places in Europe which adopted her name, and that is the small village of Sankt Radegund in Upper Austria. In the next few years, readers will see a new film come out, with the title “Radegund”. It is the story of Franz Jägerstätter, a native of Sankt Radegund, who was the only one in his village to vote against the Anschlüss and was courageous enough to be a conscientious objector during World War II.

My readers will no doubt convene that this was a dangerous thing to declare oneself to be under the Nazi regime, and in fact Jägerstätter ended up being guillotined in 1943, for the crime of “undermining military morale”. The recent (German) Pope, Benedict XVI, had Jägerstätter beatified: a more appropriate saint for our age, I think.

Yesterday afternoon, I noticed that behind Milan’s Duomo there is a small road called via Santa Tecla. What an interesting name! I wonder who she was?