There is a town on the slopes of Mt. Vesuvius that goes by the name of Nola. Although very ancient, nothing much of great historical significance has ever happened there. It did play host to three battles between Hannibal and the Romans, there was another battle of some regional significance in the Middle Ages, and that’s about it. Naples, which like all big cities has been growing outwards over the last 100 years, has finally engulfed it so that Nola is now really no more than a suburb of Naples. Sadly, Nola’s main claim to fame nowadays is that of being a hotspot of Camorra activity. On the brighter side, it is also the host to the Festa dei Gigli, the Festival of the Lilies, which, together with several similar festivals in other parts of Italy, has been listed by UNESCO as an Intangible World Heritage.

The roots of Nola’s Festival of the Lilies are very ancient, going back all the way to the 800s AD. It celebrates an even earlier moment in the city’s history, back in the 400s AD. Pope Gregory the Great, no less, relates the story. A poor widow begged the bishop of the city, Paulinus, to help her get back her only son, who had been carried off by the Vandals to North Africa after one of their frequent raids on Campania. But Paulinus had already used up his considerable fortune ransoming other Nolans enslaved by the Vandals. So the saintly bishop sailed off to North Africa and offered to take the place of the widow’s son, an offer the Vandals accepted. Some time later, the king of the Vandals discovered that this slave was the great Bishop of Nola. He at once set him free, granting him also the freedom of all the other captive Nolans which the Vandals still held. When Paulinus sailed back to Campania, the joyful citizens of Nola escorted him to his residence holding lilies.

The citizens of Nola reenact the last part of this delightful, if rather unbelievable, story every year in their Festival of the Lilies, on Paulinus’s feast day in June. They organize a lavish procession which draws thousands of people, once pious (or perhaps credulous) locals but now mostly just curious tourists. When the festival was born 1200 years ago, each person in the procession carried an actual lily. The sixth century mosaic in Sant’Apollinare in Ravenna of the procession of virgins can stand in here for this event, even though the plants in the background are date palms rather than lilies.

Over the centuries, however, those many long-stemmed lilies morphed into eight thin, very tall (25-meter tall) pyramids, each carried by a team of men. These towers are rebuilt every year. The structure’s wooden skeleton is first assembled

and then elaborate decorations are applied to one side of the pyramid.

A ninth team carries an effigy of the boat which brought Paulinus back to Nola.

The teams carry their “lilies” and the boat through Nola, with them swaying and undulating as the teams navigate the city’s narrow streets.

Once the lilies and the boat have been brought into the piazza fronting the cathedral, they are ranged along the sides of the piazza. 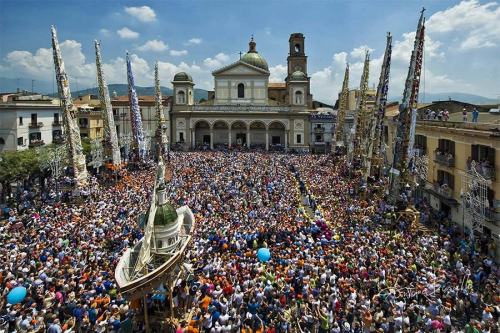 The bishop, successor of Paulinus, then blesses the assembled crowds.

Now I must rewind my story more than a century. Some time in the early 1890s (as near as I can guess), a young boy called Sabato Rodia must have witnessed the Festival. He was born in 1879 in Ribottoli, a small village some 40 kilometers east of Nola. What he saw burnt itself into his mind and stayed with him all his life. The romantic in me wants to believe that he witnessed the Festival on his way down to the port of Naples: at the age of 15, his parents packed him off, unaccompanied, to America. He joined his elder brother, who had already emigrated and who was working in the coal mines of Pennsylvania. Tragedy struck when his brother was killed in a mining accident. Sabato, who had anglicized his name on entering the States to Sam, moved out to Seattle, entered the construction business, married and had three children. In 1905, when Sam was 26, he moved himself and his family to Oakland in California. Things were looking good for him, but unfortunately something went wrong inside him. He began drinking too much, lost his job, and I suspect beat his wife, or children, or both. Whatever the case, in 1912 his wife took the children and left him, and he never saw any of them again. Luckily, Sam managed to get off the bottle and to start working again, still in the construction industry but this time as an itinerant tile setter.

All the while, something was gnawing away at him. As he told an interviewer many years later, “I had in my mind I’m gonna do somethin’, somethin’ big”. Finally, in 1921, when he was 42, he bought a small plot of land, sandwiched between the railway tracks and the tram lines, in the working-class neighbourhood of Watts in Los Angeles. He lived in the plot’s small house, while in the narrow, triangular backyard he started to recreate his own very personal take on his vivid memories of Nola’s Festival of the Lilies.

For the next 34 years, until he was 76 years old, Sam dedicated all his spare time to his project, working alone since he had no money to hire help and using nothing but the most elementary tools of the construction trade. He built in reinforced concrete, a medium he was familiar with after all his years in the construction business but also because he wanted his dream to last. Like a magpie, he picked up colorful objects wherever he came across them – broken bottles of green but also blue and brown glass, broken tiles from his tiling business, sea shells which he picked up on the nearby beaches, colored stones – and he embedded them in the wet concrete for decoration. He was happy to be squeezed in between tram and rail tracks since the passengers would be able to enjoy views of his growing creation as they passed.

Recreating Nola’s cathedral piazza in his cramped backyard, Sam built the framework of three Lilies, with an airy interconnection between the tallest.

In the site’s narrow apex, he placed the boat which brought the bishop back from the Vandals.

On the other side, he built his vision of Nola’s cathedral as an airy gazebo.

Outside of it, he placed the font from which the bishop of Nola would bless the procession.

All around the site, he built a wall, decorated inside and out with his colorful finds. 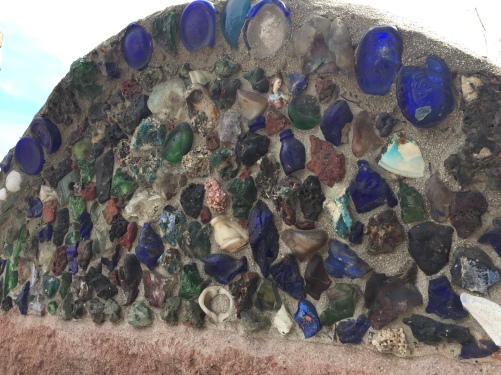 Like all artists, he proudly signed his work, in his case with an SR

and, almost like a Medieval guild member, he showed off his tools of construction. 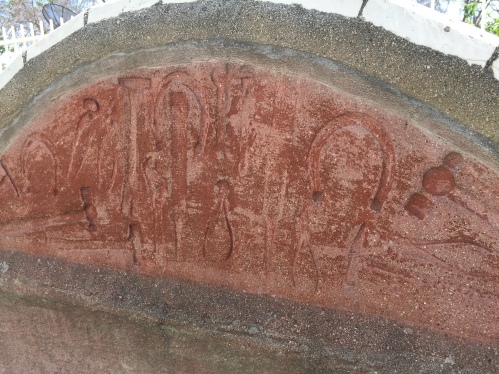 The local community must have found Sam odd, eccentric, somewhat mad, perhaps touched by God. Certainly, in a gesture of respect, the local Central American community called him Don Simon, which led to his last change of name, to Simon Rodia. In its final years, his project caught the attention of Los Angeles’s artistic community, so we finally have photos and films of Simon at work.

In 1955, Simon decided he had finished and dropped tools. Perhaps it was like the God of Genesis who on the sixth day “saw all that he had made, and it was very good”, and rested on the seventh. Or perhaps he was just tired of arguing with city officials over building permits. Whatever the reason, he deeded the property to a neighbor and moved to Martinez, California, where years before a sister of his had come out from Pennsylvania to take up residence. He lived there for another 10 years until he died at the ripe old age of 86.

As for Simon’s creation, neglect and vandalism nearly destroyed it, but good sense prevailed and the city council listed it as a Historic-Cultural Monument two years before Simon died, in 1963. Simon himself was granted the greatest of all apotheoses, a space on the cover of Sergeant Pepper’s Lonely Hearts Club Band (top right corner, near Bob Dylan). 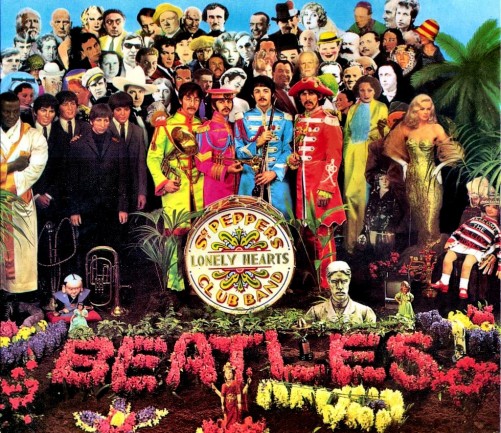 What more could a person want?