In 1960, during a televised speech, General de Gaulle, then the first President of France’s newly-minted Fifth Republic, posed the rhetorical question, “How do you govern a country which has 246 varieties of cheese?”, implying that a country with such individualism takes badly to being centrally governed. Well, Italy has more types of pasta than France has cheeses – 350 according to one website – which might explain Italy’s chronic ingovernability. We watch with anxiety as the country lurches towards a referendum, which should be about changing the Constitution to make the country more governable but is rapidly turning into a vote of no-confidence in the current government. A collapse in the government with early elections lurk around the corner, perhaps leading to a collapse of the banking sector, and – who knows? – an ignominious exit from the Euro. The continuing incoming flood-tide of refugees/economic migrants isn’t helping.

But it is not of these political anxieties that I wish to write, it is about one of these 350 pastas, which goes by the name of trofie. Like many pastas, trofie are very regional in character, coming from Liguria and even more narrowly really only being found in any quantity in the communes giving onto the Golfo Paradiso, which runs from the Monte di Portofino to the west to the outskirts of Genova to the east.

That is where my wife and I have spent the last few days, and that’s where I found myself a few evenings ago in front of a plate of trofie in a sauce of tomatoes and zucchini, with a couple of shrimp thrown in for good measure. 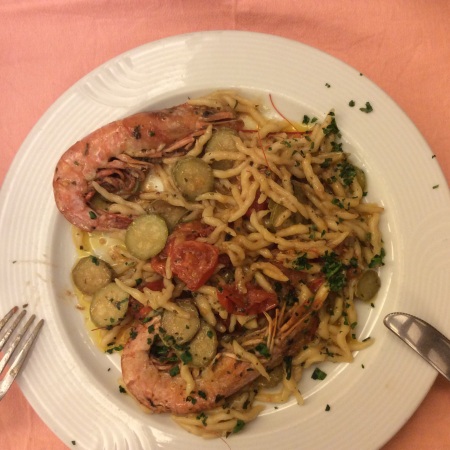 As readers will notice, trofie look rather like worms – an unappetizing simile but really the one that describes them best. The shape comes from how they are made: small lumps of dough are rubbed between the hands (which action is also probably the source of their name: strofinare in Italian means to rub). They are very often eaten with pesto, that other, incomparable, gift from Liguria to global cuisine.

I still remember with great clarity the first time I ever ate pesto. My wife and I had gone walking in the hills which in the picture above run down into the Golfo Paradiso. We found ourselves in a cheery restaurant serving only locals, all of whom spoke the local incomprehensible – to my ears – dialect. We were served lasagne in pesto with brisk efficiency. So good they were … We came back to this restaurant often in the years we lived in Italy. Although pesto is considered typically Ligurian, its ingredients suggest a broader reach. The basil, the oil, the pine nuts do indeed come from Liguria – the basil grown in Liguria is the most perfumed I have ever known – but the Parmesan comes from across the Apennine chain which hugs the coast here, while the Pecorino comes from Sardinia across the Golfo Paradiso and beyond. In any event, my wife bought a small cupful of pesto to bring back to Milan, where we will eat it with pansotti, another incredibly good pasta from Liguria – but that is a story for another day.

In the same shop, my wife pointed to a different type of trofie, made with chestnut flour. Chestnut trees grow on those Ligurian hills we go walking in, above the olive groves; they probably grew all the way to the valley bottoms before olive trees were brought to Liguria. On the spur of the moment I told her to buy them, along with the sauce with which they are normally eaten, walnut sauce, another gift of Liguria to the world; walnut trees grow well up on the Ligurian hills. As readers can see in the next photo, these trofie are browner than the normal trofie made with hard wheat. They are also a little sweeter, as befits a pasta made with chestnuts, and a walnut sauce goes wonderfully well with them, softening that sweet note.

Many decades ago, we brought a cupful of walnut sauce with us to Paris and served it on a pasta to a friend of ours, an amateur cook from Sicily. He muttered over and over again, “Mmm, that’s good” (a pretty amazing statement for a Sicilian to make about northern Italian cuisine). To thank us, the next evening he whipped up a pasta served with a broccoli-based sauce – soooo good!

Those chestnut trofie make me reflect once more on Italy. My first Italian boss came from the province of Varese, to the north of Milan, a part of the country which before the economic miracle of the 1950s and ’60s was very poor. I don’t know how we got onto the topic, but one day he started reminiscing about his childhood, and he told me that when his parents were young and food ran short they were sent off into the woods to collect chestnuts, which would be ground to a flour to make bread from. Liguria was also a very poor region until quite recently. No doubt chestnut trofie are from those times. Italy has come a long way in the last sixty years, I just hope it can stay the course.