Two years ago, when we were last in New York, we visited Ground Zero and the newly created Memorial to the victims of 9/11. Several days ago, during our current New York stay, we decided to go back to see how things have moved on.

Well, I’m glad to report that One World Trade Center is finally finished. I read up the back story to the development of the overall master plan for the area as well as for the design of the individual buildings; a veritable Shakespearean drama, with super egos confronting each other in dramatic showdowns, stabbing each other in the back, making sonorous declarations to the press, and otherwise carrying on like children in kindergarten. It’s a wonder that anything got done at all.

Rising serenely above all this human mayhem, WTC 1 is a very lovely, glass-sheathed building. As readers can see in the photo below, the corners have been severely shaved back. I wouldn’t know how to describe the geometrical shenanigans going on here, so I simply quote a line from the building’s entry in Wikipedia: “from the 20th floor upwards, the square edges of the tower’s cubic base are chamfered back, shaping the building into eight tall isosceles triangles, or an elongated square antiprism”. However you describe it, the effect is pretty cool. 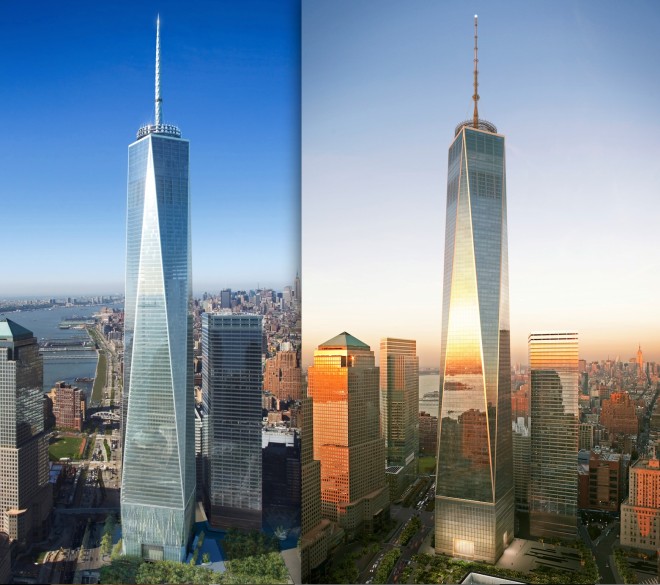 WTC 2 is lagging behind. After having gone through a complete redesign, it is now being built, with a planned completion date of 2020. It should look like this once it is finished – a set of cubes stacked somewhat untidily one on top of the other.

Personally, I’m not sure I will like this building. Something about those poorly stacked cubes disturbs my sensibilities. But I’m willing to be convinced once 2020 rolls around.

I will skip over WTCs 3, 4, 5 and 7 (WTC 6 seems to have disappeared from the roster in the new master plan), although I would draw readers’ attention to WTC 4, finished a few years ago and a very handsome building indeed. I want to focus instead on the Transportation Hub, which is a grand name for the entry to the subway lines running under the site. This, I have to say, is a rather strange-looking structure. 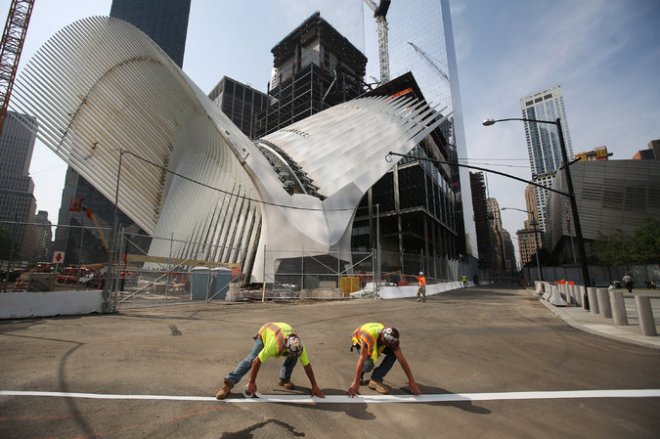 When I first caught sight of it, from the side, I was powerfully reminded of photos that came out in the immediate aftermath of September 11, showing the jagged remains of the outer sheathing of the old WTC 1 and 2 buildings which had come crashing to the ground.

I don’t know if that was also on the mind of the Hub’s designer, the Spanish architect Santiago Calatrava. In his public pronouncements, he has talked rather about it being like a bird flying out of a hand. It certainly has a bird-like quality from the back, although commentators have suggested a more stegosaurus-like look, which as the photo above shows is certainly true from the front. For those readers who may not be familiar with their dinosaurs I throw in a picture here of a reconstructed stegosaurus.

The similarity is even more striking when you consider a stegosaurus skeleton.

Frankly, I’m not completely sure how well this piece of design will withstand the test of time. Calatrava’s other design for the new World Trade Centre, the rebuilding of the tiny Orthodox Church of St. Nicholas which got flattened in the maelstrom of September 11, may weather better, at least from the models I’ve seen

but we will have to wait until 2017 to pass a firmer judgement.

Well, it seems that my wife and I have plenty of excuses to come back to New York in the years to come. Which is nice, because the primary current excuse for our coming, our daughter living here, is about to disappear as she moves on to greater and better things.