One of the more remarkable things which my wife and I did this year during our three-week stint in Kyoto was to visit the Miho Museum. I must confess that we had never heard of this museum before scanning a newspaper listing the various things to do in Kyoto during the month of October. It’s actually located outside of the city, up in the Shigaraki Mountains, surrounded by a nature reserve. To get there was a mini-adventure in itself: bus to subway; subway to train; train to a final bus, which after a 45-minute meander over hill and dale brought us to our destination – all this while trying to follow our course by painfully deciphering the Japanese names of the stations or bus stops as they went by.

What decided us to go – apart from the excuse it gave us to adventure outside of Kyoto – was the fact that the museum had been designed by I.M. Pei, he of the Pyramid at the Louvre 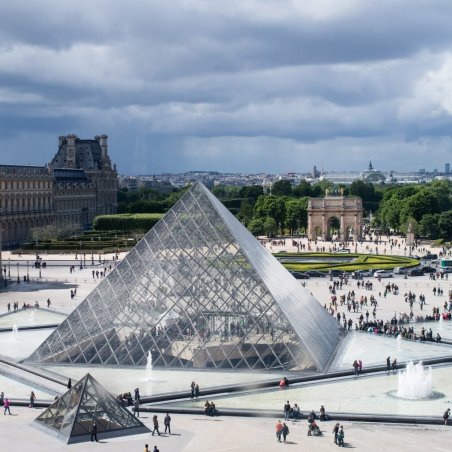 but also of the east wing of the National Gallery in Washington D.C., which we had discovered as youngsters in the early 1980s 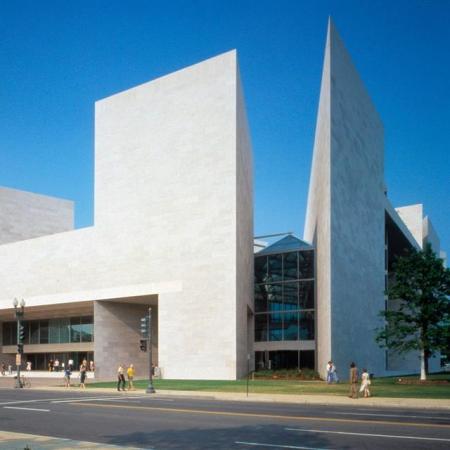 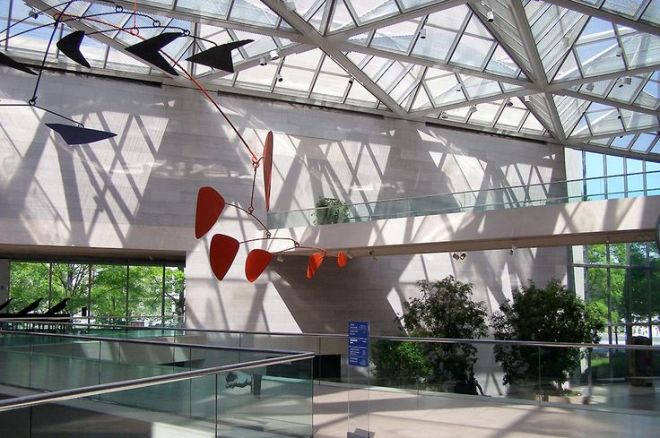 as well as of the Suzhou Museum, which we had discovered at a more venerable age some five years ago 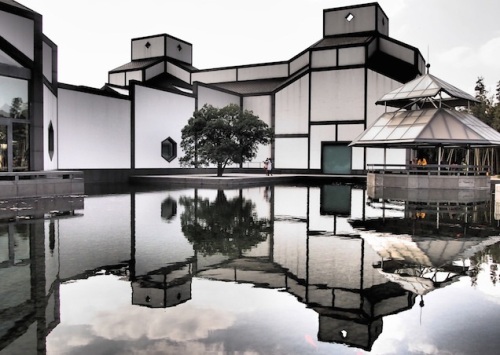 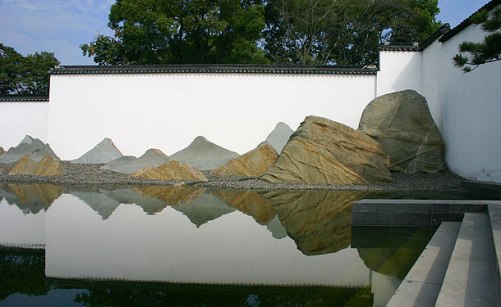 along with his building for the Bank of China in Hong Kong. 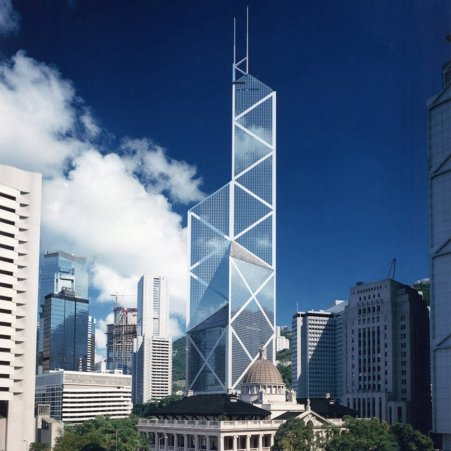 Mr. Pei, who – as we discovered at the museum in some breathless descriptions of him – is 100 years old this year, did not deceive us. He whetted our appetite by leading us up a rather spectacular road to reach the museum proper from the car park, bus drop-off, and ticket office. After passing through a twisting tunnel, the road runs over a futuristic bridge spanning a cleft in the hills to bring us to the museum’s main door. 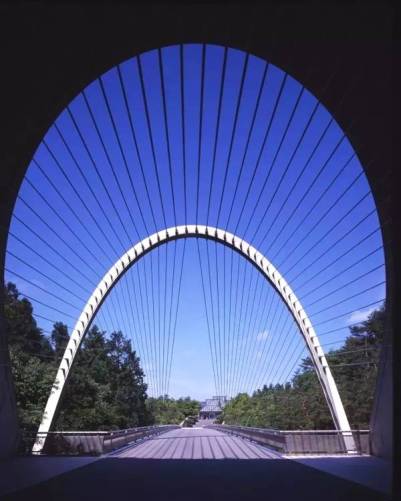 There is hardly anything to see of the museum from the outside. In the museum’s own descriptions of its design much is made of the fact that it has been buried so as to have minimal impact on the surrounding nature reserve. But the inside more than makes up for this external modesty: long clean lines, asymmetry, a profusion of triangles, light flooding in – all signature touches from I.M. Pei; a wonderful light beige stone used for cladding, spectacular views across the valley behind the museum. 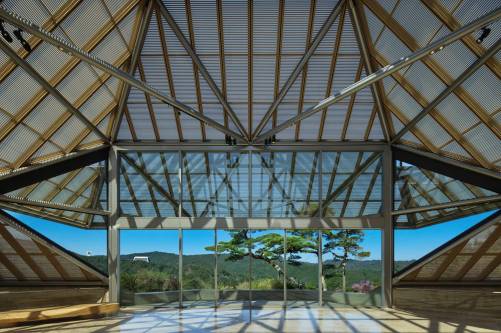 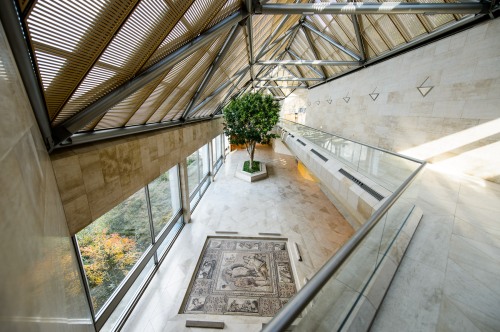 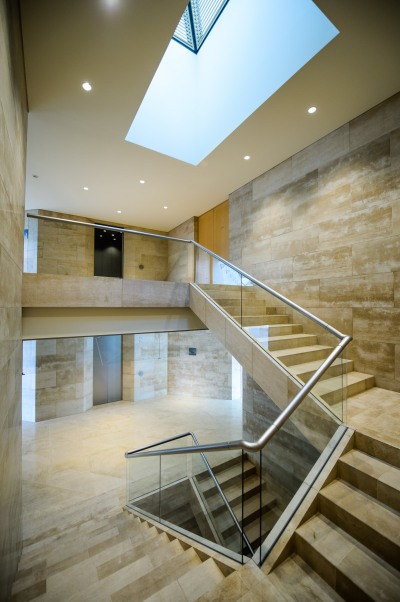 And the collection housed by all this is not to be sniffed at. 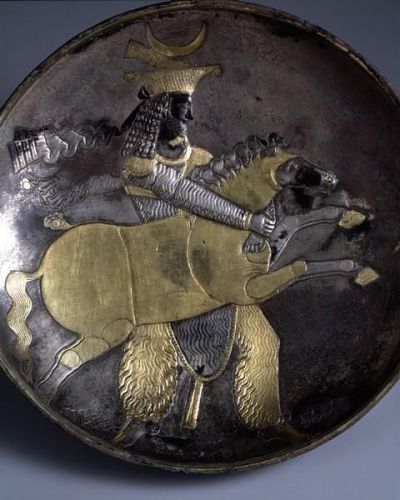 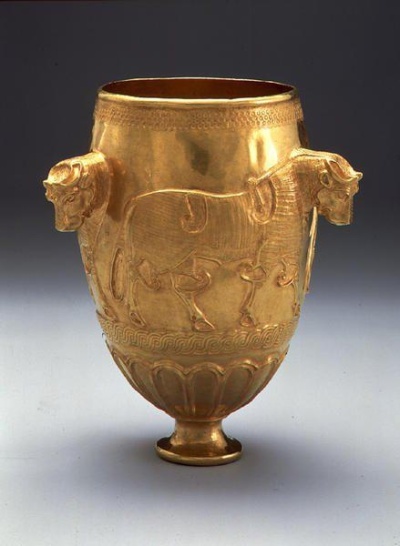 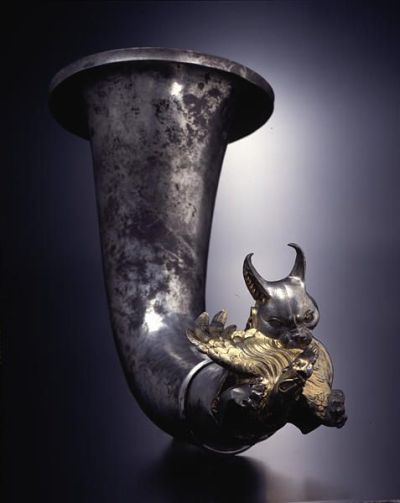 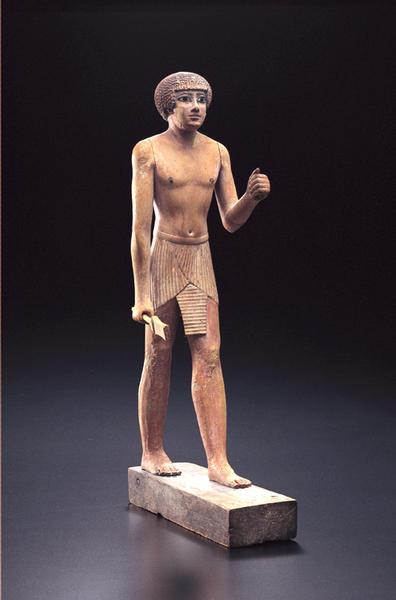 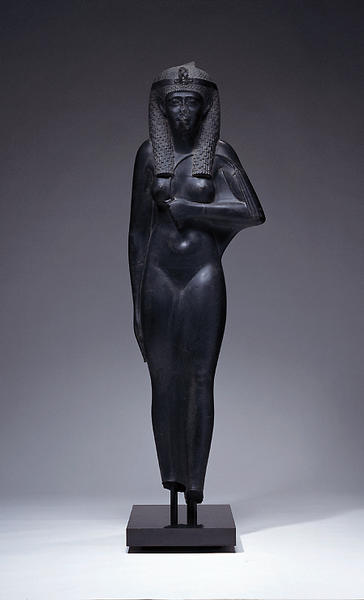 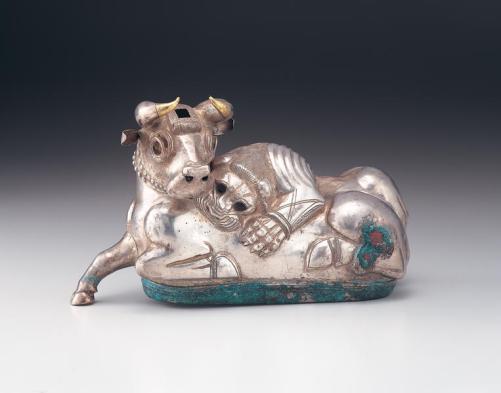 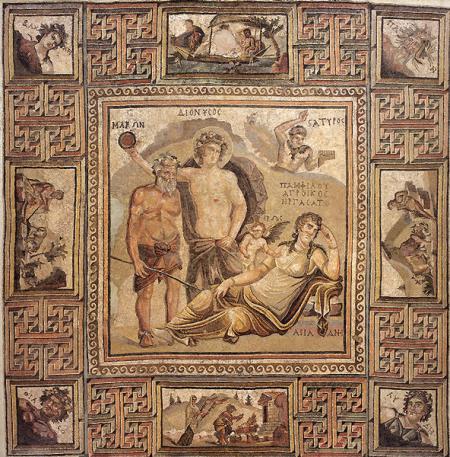 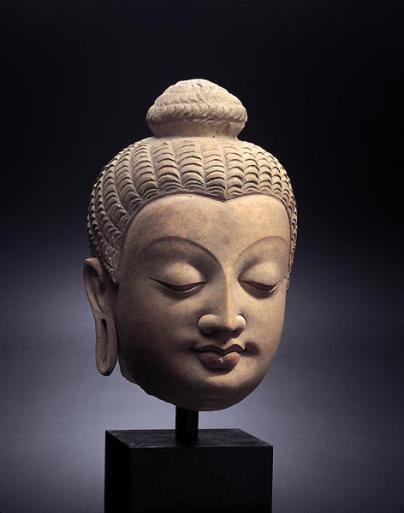 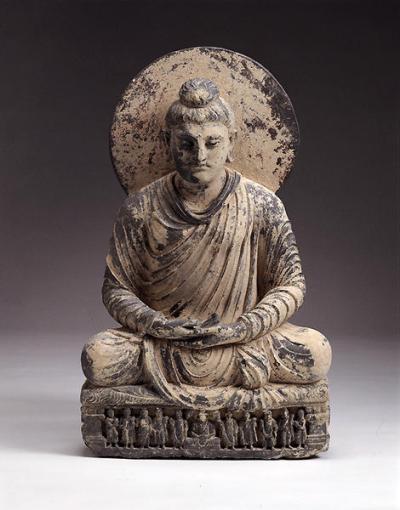 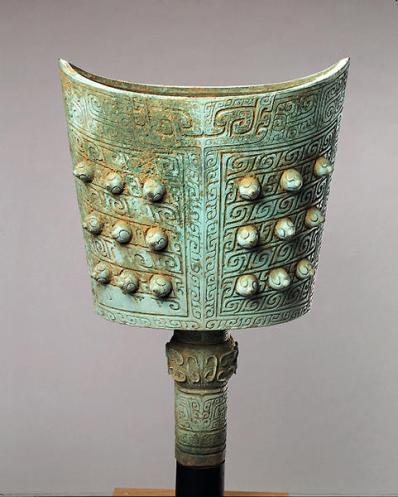 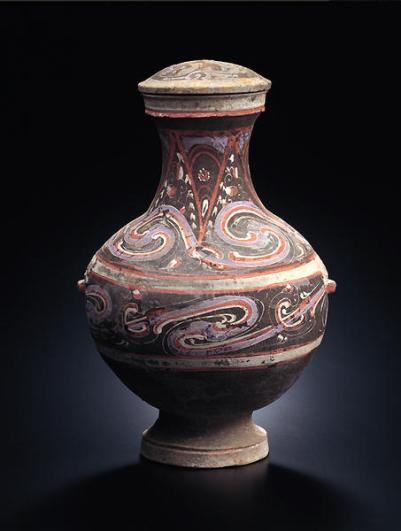 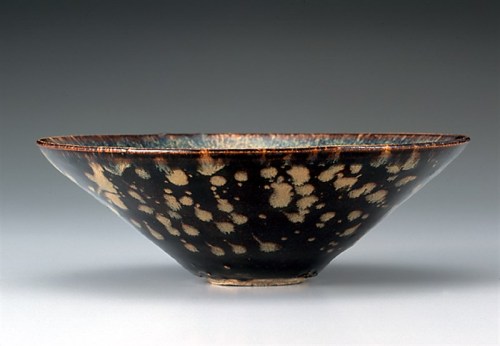 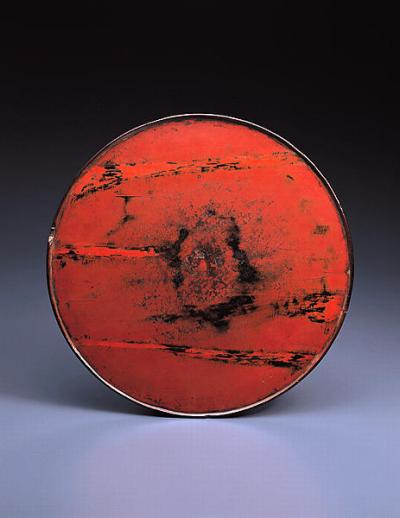 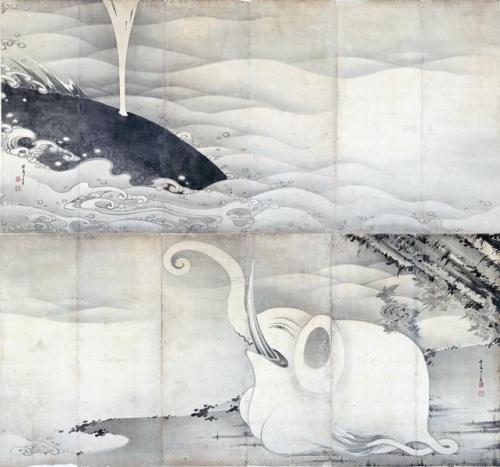 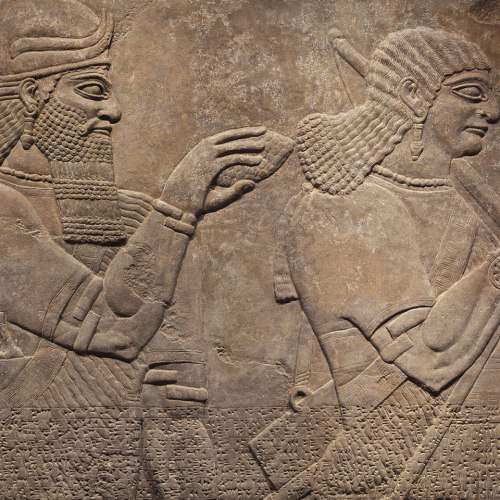 And yet … some second-thoughts began to creep in as we watched videos describing the building of the museum, and read articles about how the collection had been put together. When we first read that the museum had been built below ground to respect the natural surroundings, we presumed that they had dug and tunneled down into the rock. Not a bit of it! They just took a huge bite out of the ridge, built the museum, and then covered it up and planted trees and vegetation on top. Granted, the modeling of the covering had been done well, blending apparently seamlessly with the remaining ridge, and the plantings have stayed faithful to the original vegetation. But to claim that this way of building respected the original environment seems to be quite an exaggeration.

As for the art, we read that Mihoko Koyama, who with her daughter Hiroko commissioned Pei, had originally planned to build a small museum to house her relatively small collection of Japanese art, mostly of items linked to the tea ceremony. But Pei told them he would accept the commission only if it would be for an international collection. So the Koyamas went on a massive buying spree on the international art markets. We know from cases like the J. Paul Getty Museum in Los Angeles that when rich buyers appear on the art market wanting to buy in a hurry and not looking too closely at the exact history of the pieces they are offered, all the tomb robbers and their shady intermediary dealers are given a huge incentive to carry out their nefarious activities. Indeed, it turned out that a Chinese statue from the sixth century which mother and daughter purchased for their museum had been stolen from a public garden in Shandong province (let’s put aside questions as to why on earth such a statue should have been put up in a public garden in the first place). Who knows how many other of the museum pieces have shady pasts? And of course hardly any of the pieces have known provenances. So, while they are unquestionably beautiful works of art, their value to archaeology is zero.

I must confess I also began to uncharitably ask myself how Ms. Koyama senior got the $400 million – or maybe even $1 billion (the size of the final bill is unclear) – which it took to pay both for the building of the museum and stocking it with high-end art. So I began to burrow into her life. The details I found were sketchy, so what I present here is subject to possible revision.

As if it wasn’t enough to be a wealthy Japanese heiress, Mihoko married a Japanese millionaire. I’ve not managed to find out how he made – or inherited – his millions. Bottom line, she was very comfortably off in her own right. Whether or not she was happy in her marriage is not related.

The moment that changed her life came in 1941, when at the age of 31 she met Mokichi Okada. An intriguing fellow, this Okada. Born poor, he eventually made a fortune in the jewelry business. In 1926, at the age of 44, he claimed to have received a special revelation from God, and nine years later he founded a new religion, the Church of World Messianity. This religion has three pillars, the one of most relevance to us being the Art of Beauty. Okada believed that art had an important role to play in heightening people’s emotions, enriching their lives, and giving meaning and enjoyment to their existence. I can’t really argue with that; this whole blog is pretty much based on the same idea. The second pillar of this religion is the Art of Nature, which includes nature farming. Originally called “no fertilizer farming”, nature farming is based on the ideas that fertilizers pollute the soil and weaken its power of production, that pests will eventually break out from the excessive use of fertilizers, that the difference in disease incidence between resistant and susceptible plants is attributed to nutritional conditions inside the body, and that vegetables and fruits produced by nature farming taste better than those by chemical farming. I can’t quarrel with any of that either (apart from the third idea, which I don’t really understand).

Where things begin to get sticky is the religion’s third and actually most important pillar, the concept of johrei. Okada claimed that his divine revelation of 1926 gave him the power to be a channel of God’s Healing Light (“johrei” in Japanese), which could purify a person’s spiritual realm and so remove the spiritual causes of that person’s illness, poverty, and unhappiness. If enough people received johrei, then they would achieve Messianity and a new Messianic Age would be inaugurated. Okada went on to teach johrei to his followers, allowing them to achieve, like him, Messianity and spread the teachings across the world. Wearing a pendant containing a copy of one of Okada’s calligraphies, which allows the wearers to access the powers of Okada in the spirit world, practitioners of johrei claim to be able to channel healing light into patients by waving their hands over the their body. All this would be kind of cute although pretty weird if it weren’t for the fact that members of this religion forsake modern medicine, arguing that johrei alone can heal. So the usual stories abound of children dying of perfectly preventable diseases because their parents refused to go and see a doctor.

In any event, Mihoko Koyama was bowled over by Okada’s teachings, and she decided to devote the rest of her life to practicing what he taught. After this, things get a little murky. She must have joined Okada’s Church of World Messianity but in 1970, for reasons that are not apparent – at least not from the “open literature” of the Internet – she split off and founded her own group, the Shinji Shumeikai group, Shumei for short. The group was dedicated to the same three principles as Okada’s church: the pursuit of beauty through art; appreciation of nature and “natural agriculture”; the practice of johrei. Mihoko was Shumei’s First President, her daughter Hiroko has been its Second President since her mother died.

All just fairly weird were it not for the distasteful issue of money. To become a new member of Shumei, one has to participate in a three-day “training” in johrei and pay about $300 to obtain the famous pendant used during johrei. Members are then put under severe pressure to either bring in new recruits or to make donations, with public humiliation if they can’t meet agreed targets. Members are also subject to a “daily gratitude donation”, where they are expected to donate 100 yen for every meal they eat to show their gratitude for a safe daily life. This is equivalent to about $100 a month. Members are also expected to make a donation every time they visit the group’s headquarters, and of course the bigger the donation, the greater the praise. Whenever members have a stroke of good luck, they are encouraged to make a donation commensurate to the size of their luck. Conversely, when members suffer a misfortune, they are encouraged to make a donation in thanks that the spirit of Okada helped them avoid the worst. And so on.

So, after this rather long digression through Mihoko Koyama’s life, we can come back to my uncharitable question: how did she pay for the Miho Museum? Well, I would like to believe that Ms Koyama used some of her personal wealth to foot the bills, although the cynic within me suspects that much if not all of the money came from all those donations that the members of Shumei have piously or perhaps fearfully made over the years, or that have been extorted from them through threats of humiliation, eternal damnation, or worse.

All of which leaves a rather bad taste in my mouth. But then, how did all those Renaissance popes pay for the wonderful art they commissioned from the likes of Raphael and Michelangelo? Wasn’t it the Popes’ selling of the indulgences to fund their art purchases and building programmes which led to Martin Luther’s disgust with Rome and eventually the Protestant Reformation?
___________________