A few days ago, my wife and I went for a walk in the Wiener Wald, those woods which drape the hills ringing Vienna on its northern and western sides. It was a public holiday, the Feast of Corpus Christi, so it seemed an excellent excuse to go for a ramble in the woods. On top of it, it was a beautiful day, bright, sunny, with a slight breeze.

We were not disappointed. We found surprisingly few people. The beech trees were splendid

with sunlight filtering through their leaves.

Wildflowers peeped out from the undergrowth 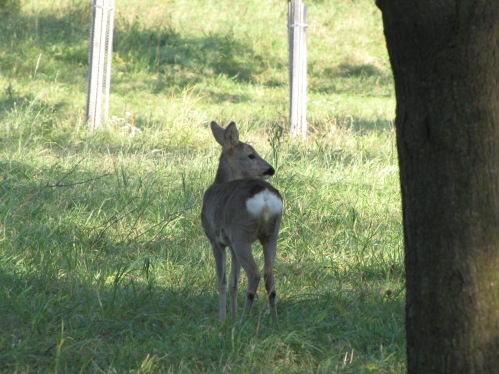 In a word, it was perfect.

Except for one thing: the fetid smell that periodically wafted up from the forest floor.

The source of the smell was these plants, which carpeted the ground in many parts of the woods. 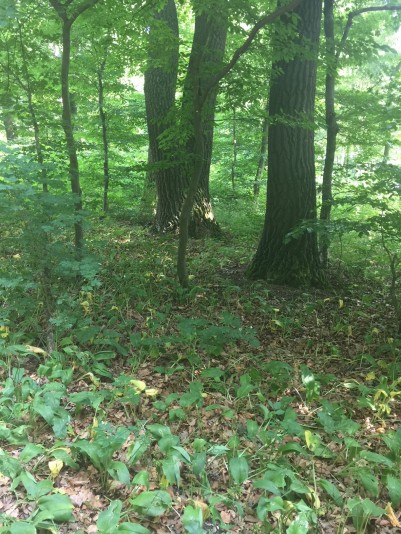 They are wild garlic, Allium ursinum, so readers will not be surprised if I say that the smell they emanated made me think of rancid garlic cloves. It was quite similar to the nauseous smell given off by some of the hole-in-the-wall kebab joints in Vienna, where garlic powder is used with wild abandon.

Our walk was too late in the season for us to at least enjoy the delicate white flower they display. 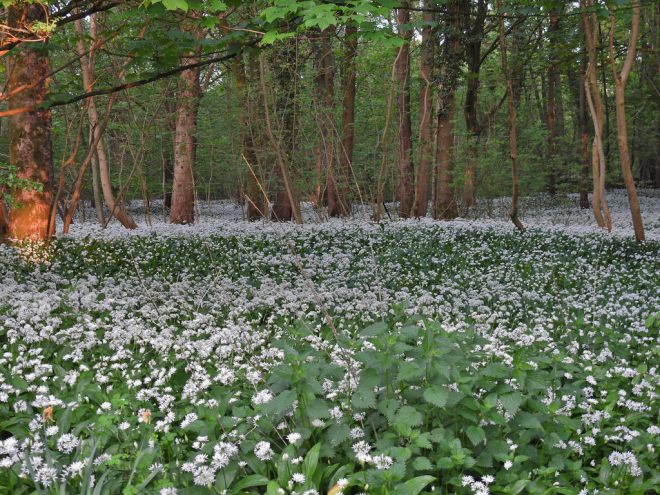 For that, you need to go into the woods in April, early May. But it was just as well we had come late: previous experience had shown me that when the plant is flowering the smell is even more penetrating.

I remember talking with a German colleague of mine about my first brush with wild garlic’s exhalations in the Viennese woods. He sympathized, but waxed eloquent about the soup which can be made from its leaves. As previous postings record, I am no fan of garlic and so have never tried this soup. But for readers who are better disposed to garlic than I am and who happen to have a wood nearby in which wild garlic grows, I throw in an Austrian version of the soup’s recipe (the amounts cited here should serve four people). Pick 200 grams of wild garlic leaves (one source suggests picking them young and tender, even before the plant flowers, to get the most delicate taste). Wash, drain, and chop finely. Melt 50 grams of butter in a saucepan, stir in 3 tablespoons of flour, and slowly add 1 litre of vegetable stock. Bring to a boil. Stir in the chopped wild garlic leaves. Bring to a boil again. Simmer gently, all the while seasoning with salt, pepper, a shot of lemon juice, and a pinch of anchovy paste. Finally, stir in 1/8 litre of sour cream and two tablespoons of whipped cream, season to taste with a pinch of nutmeg. The soup should look something like this.

My favourite source of information – Wikipedia – tells me that wild garlic is native to the temperate regions of Europe, from Britain in the west to the Caucasus in the east. Wikipedia also informs me that we Europeans have been munching on wild garlic leaves in one form or another for the last 10,000 years or so – an impression of a wild garlic leaf was found in a Mesolithic settlement in Denmark. Did our European forebears also munch on the bulb? Perhaps only if they were very hungry, because the bulb of wild garlic is very small.

No, it’s not Allium ursinum which gave us the garlic cloves that we are so – unfortunately – familiar with today. We have to thank a Central Asian cousin, Allium longicuspis, for that.

Early farmers in Central Asia cultivated the wild variety, and as has happened so many times with other plants they played around with it and slowly turned it into the plant we know today, with that pungent – oh, so pungent! – bulb.

It seems that garlic was one of the very first plants that our farming ancestors tinkered with. Their tinkering was so successful that the plant got carried out of Central Asia along the Silk Road and other trade routes, east to China and south-east Asia, south to the Indian subcontinent, west to the kingdoms of the Near East, followed by Egypt and later Greece and Rome. As the plant was moved out of its homeland, farmers kept tinkering so that today there is a bewildering number of sub-variants.

Now, I know this will raise hackles among garlic lovers, but really, what on earth possessed those early farmers to spend their precious time in developing this bulb?! It tastes really strong (“pungent” is the word used in the garlic literature), it leaves a metallic taste in your mouth after you’ve eaten it (well, in mine at least), it makes your breath – indeed, your whole person – smell “pungently” after partaking of it, and it – hmm, let me see how best to put this – it disrupts your digestive system resulting in odorous wind and other unpleasant side effects in the bathroom (at least, it does so in my case).

But develop it they did. And they found enthusiastic consumers far and wide. The ancient Egyptians consumed particularly enthusiastically. The poor buggers who slaved away to put these up

were, it seems, paid with the stuff – garlic was believed to give one strength, and what did these guys need but strength, and a lot of it? It’s not as if the workers were forced to eat it, either. It seems they loved it. One of the only two known slave revolts in Egypt occurred after the failure of the annual garlic harvest.

Generally speaking, in all places and at all times garlic was believed to be good for your health and a cure for all sorts of maladies, from the plague to the pox. In fact, this may have been why garlic was originally developed – for its supposed health effects rather than as a food additive. There must be people who still believe in garlic’s curative powers; why else would companies offer these sorts of over-the-counter products for sale?

One persistent belief is that garlic has antiseptic properties. It seems that garlic was used during both World Wars as an antiseptic and a cure for dysentery. I can hardly believe it; doctors in the mid-20th Century had no better medicine than that?! What I do know is that until very recently the Chinese were using garlic as a sort of antiseptic mouthwash. A friend of ours who had been already living in China for some years before we arrived told me that in the early noughties it was common for people to rub their gums with a garlic clove in the morning before going to work. He said that taking the bus in the morning was not for the faint of heart. I shudder inwardly every time I think of his story.

Talking of shuddering, in ancient Greek and Roman times (and probably even before) it was believed that garlic was a powerful aphrodisiac. Quite how anyone could have come to this conclusion is beyond me. But then the human mind has an infinite capacity for self-delusion. And of course it must have been men who believed this. I can imagine the scene: a randy old goat who munches on the ancient world’s equivalent of a little blue pill and then rushes off to bed to perform. Pity the poor woman who is the recipient of his performance!

In fact, smelling of garlic has always been associated with being uncouth. Those Egyptian priests who eagerly fed their workers garlic never touched the stuff themselves. Upper caste Indians never let garlic pass their lips in case it made them smell like their lower caste compatriots. In ancient Greece, it was generally believed that the gods disliked the smell of garlic. In temples dedicated to the goddess Cybele, this was taken to extremes. Those who wished to enter one of her temples had to pass the garlic breath test. King Alfonso of Castille ruled that any gentle person coming into court smelling of garlic was banished for a week. In the US until the 1940s the reek of garlic was used as an ethnic slur, being called such things ‘Italian perfume’.

I suppose that the thinking which led Greeks to conclude that the gods disliked the smell of garlic also led to the belief that garlic could ward off witches, evil spirits and the like. Which belief no doubt underlies the use of garlic to ward off vampires. All this tells me is that vampires have good taste.

Readers may protest and say that garlic’s main role is surely now in the kitchen. True. And to show that even with garlic I can be broadminded let me throw in here a famous recipe where garlic plays the main role, for the garlic lovers out there to try if they have not done so already. It is the recipe for another soup, Sopa de Ajo, Garlic Soup, which is eaten throughout Spain. Once again, the amounts cited here will serve four. Heat 4 tablespoons of olive oil in a saucepan over a low heat. Add 4 to 5 large garlic bulbs (yes, four to five), broken into the cloves – do not remove their skin. Fry gently, stirring often, for 15-20 minutes, until the skins are golden brown and the flesh is soft. Remove them from the hot oil. Wait until they have cooled a little, then squeeze out the garlic flesh, discarding the skins. Puree and set aside. Meanwhile, add 100g of cooking chorizo, cut into little pieces, to the pan and fry until crisp and caramelized. Add 1 teaspoon of fresh thyme leaves, fry for a few seconds. Then add the pureed garlic and stir it in well. Add ½ teaspoon of sweet smoked Spanish paprika, and pour on 1 litre of chicken stock. Bring to a boil, gently simmer, and season to taste. About two minutes before serving, poach four eggs in the soup and add 8 slices of ciabatta, toasted and torn into rough pieces. The finished product should look something like this. 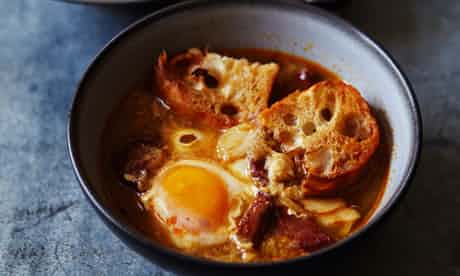 Four to five garlic bulbs … For all my broadmindedness, I cannot suppress yet another inward shudder. What the consumers of this soup must smell like when they rise from the dining table! Quite possibly, it was this soup which had been eaten by the Spanish gentlemen who plays the lead role in my most searing memory of garlic breath. I invite my readers to dip into the post where I write about this painful episode in my life. In the meantime, once I am back from my travels my wife and I will go for other long and pleasant walks in the Wiener Wald. The wild garlic plants were already wilting when we took our walk on Corpus Christi Day. Hopefully, they will all soon be dead and I can enjoy the woods without my nostrils being assailed by the smell of rancid garlic.

Woods photos: ours, except:
Deer in woods: https://viennalife.wordpress.com/tag/vienna-woods/