G’day cobbers!  My wife and I are just back from a short holiday in Australia – the first time either of us have visited the country.

OK, let me say right up front that I am indulging in some revolting ethnic typing here. No-one during our trip said either “g’day” or “cobber” to us. Maybe in the small part of Australia we visited – Sydney, the coast immediately to the south of it, Canberra, and the Snowy Mountains – people don’t use these expressions, but the fact is no-one said them. Sorry about that!

But they did use a number of expressions which sounded odd to my English ear. “No worries”, used the same way I would use “you’re welcome”, as in “thank you”, “no worries”. “See you later” at the end of a conversation, even if there was no chance in hell of ever seeing the other person again. “How’s it going today?” at the beginning of a conversation, where I would merely say “hello” – the Americans have the same habit; I’ve never known how to respond to this. They obviously don’t want to hear a catalogue of my ills, so should I just say “fine”, even if I’m feeling like death warmed up? And should I in turn ask them how it’s going for them? That seems the logical – and civil – thing to do, but the few times I’ve done it my American or Australian interlocutors have seemed rather startled.

Then there were words used in normal conversation which I’ve only heard as Australian exotica. Take “billabong”, for instance, which I’d only ever heard in the song “Waltzing Mathilda” (“Once a jolly swagman camped by a billabong, Under the shade of a coolibah tree” etc.). But after hearing several people talk about billabongs, I plucked up the courage to ask what they were exactly. (FYI, they are isolated ponds left behind after a river changes course; we saw many of them on the upper reaches of the Murray River – more on that later. Now I have to find out what a coolibah tree is ..)

And of course there was the accent. Though distinctive,  it wasn’t that hard for us to decipher. But for several nights in a row I did try to figure out, through endless repetition with my mouth in various shapes, how the Australians were forming their O’s, as in “no” or “go”. My wife eventually ordered me to halt my dreadful drones, or else.  The New Zealand accent is much harder to follow, as my wife and I discovered a few years ago when we visited that country. I quickly got into the habit of standing next to her whenever she asked a New Zealander a question, because there was a 99% chance she wouldn’t understand the answer whereas in my case it was only 60%, so I could step in to continue the conversation and not have us standing there smiling uncertainly at the responder.

If I start with these linguistic considerations, it’s because the language we heard during our trip typifies my feelings about Australia: so much was deeply familiar, yet so much was quite strange. This continuing counterpoint between the familiar and the strange accompanied us throughout our trip.

We started our trip in Sydney, emerging bleary-eyed from our overnight flight to a sunny, beautifully clear, fresh day, conditions which we had pretty much for the whole trip. Ah, those clear, intensely blue skies! After all the misty, foggy, smoggy days we had endured in Beijing, we couldn’t stop remarking with wonder on the blueness of the sky, and on the clarity, the sharpness of the air.

Our first port of call was – had to be – the Sydney Opera House down at the harbour. The path we chose to get there took us through the city’s botanic gardens: shades of Kew Gardens in London, so familiar to me after multiple visits there as a child with my grandmother. A familiarity made that much stronger by the Worthy Civic Buildings like Government House and the Art Gallery of New South Wales which lie along the gardens’ edges and which obviously belong to that class of British official buildings which clutter up Imperial London and dot the cities of the ex-British colonies. But the gardens also had a more exotic flavour, planted as they are with Australian species I had never seen before; look at this tree, for instance, with its shaggy bark. My wife and I gawked at it, never having seen anything quite like it. It’s a Prickly Leaved Tea Tree, by the way.

And look at these really odd birds, with their curiously curved long thin beaks, which populated the gardens.

They played the familiar role of pigeons in a park, padding cautiously around people sitting or lying on the grass and looking out for any crumbs or left-overs to pick up, as this photo by someone else amply demonstrates.

They went about their business in a much more dignified manner than pigeons, though; aristocrats fallen on hard times compared to pigeons’ scabby lumpen-proletarianism. I later learned that this is the Austalian white ibis.

To enter the gardens we first had to walk down Victoria Street, which was lined with magnificent plane trees – the familiar – but also rows of two-floor houses with verandahs running the length of the second floor – very foreign to our eyes.

My wife saw a resemblance to houses we had seen ages ago in Savannah, Georgia. To me, they had something of the Caribbean or the Latin American, or maybe the South-East Asian. Certainly not English.  We saw similar houses in other parts of old Sydney. I wonder where their design came from?

This road threw up another delight, this flowering plant which we later saw in a number of other places. 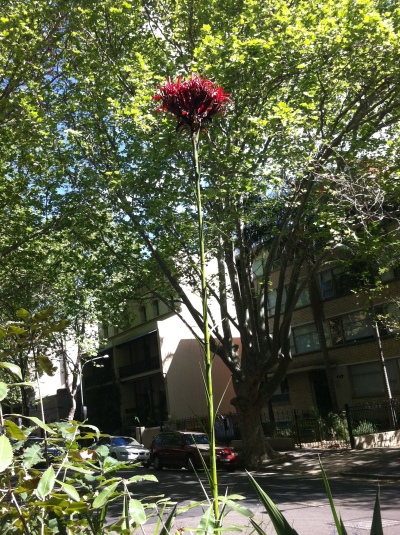 My wife and I had never seen this plant before, but it reminded us powerfully of the flowering agave plant which we often see when we go down to the sea in Italy. 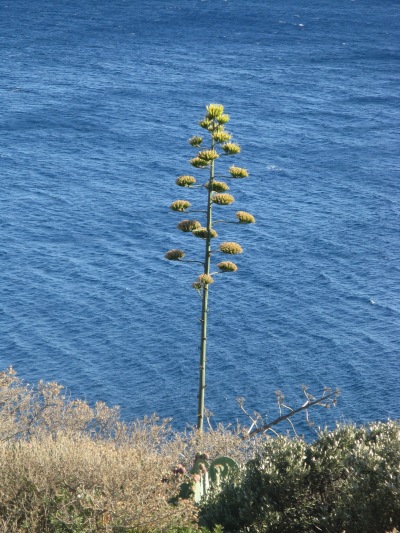 And so eventually, after these various detours, we came to the Sydney Opera House. 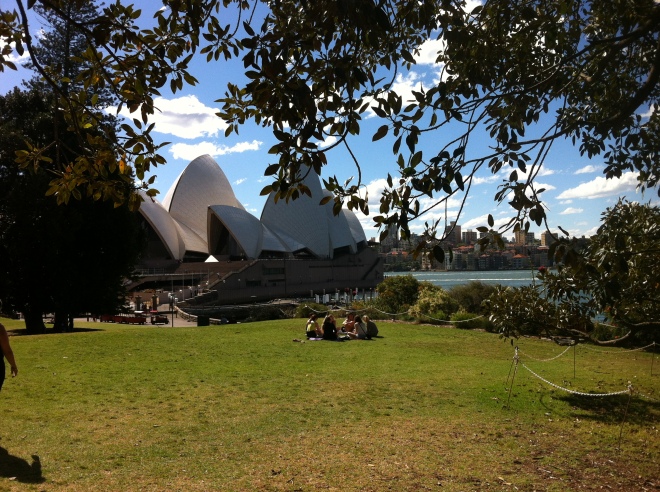 What a magnificent, magnificent building! All the more stunning because of its position in the harbour, its white sails, or wings, or shells, picked out against blue: blue skies above, blue waters below.

We came back to it again and again, with a ride on one of the harbour’s many ferries … 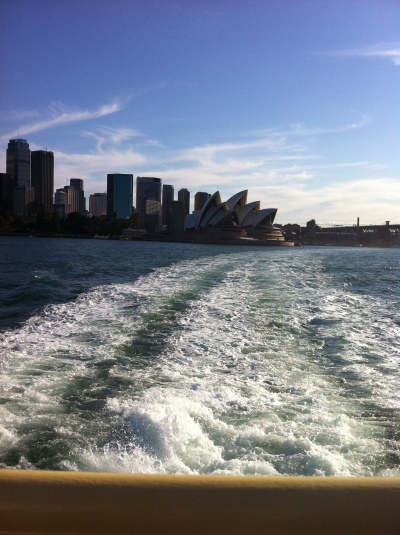 … with a concert one evening (where we were served up a strange medley of Wagnerian themes), which allowed us to see the building at night … 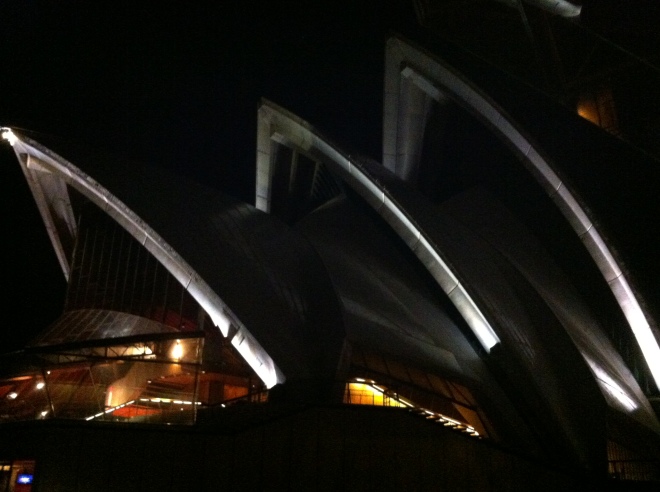 … and finally with a tour of the whole complex, where I discovered to my surprise that the shells are not plain whitened concrete as I had imagined but are covered with ceramic tiles of different shades of white, and with different degrees of shine, very beautiful to look at close up. 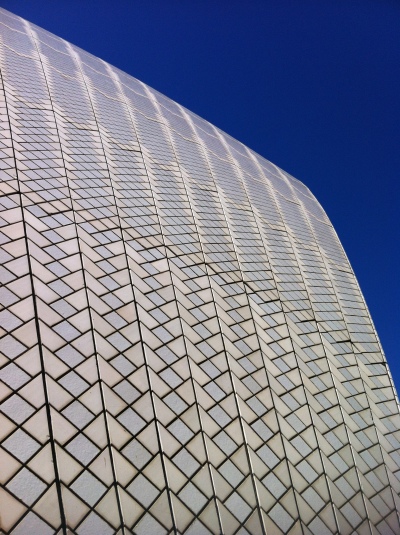 The Opera House is undoubtedly a marvel, alone worth the trip. It is truly unique, I cannot think of any building anywhere quite like it (incidentally, the story of its construction is also dramatic, full of clashes between huge egoes, of back-stabbings, of bad-mouthings, and of a final dramatic denouement; worthy of an opera). I cannot say the same of that other architectural icon in Sydney, the Harbour Bridge. Perhaps its construction was an engineering feat in its time (the 1930s), but I find all that criss-cross of thick, black iron bars horribly clunky.

It reminds me of Scotland’s Firth of Forth railway bridge

the ugly duckling to the later Firth of Forth road bridge, with its beautiful soaring lines of a classical suspension bridge. 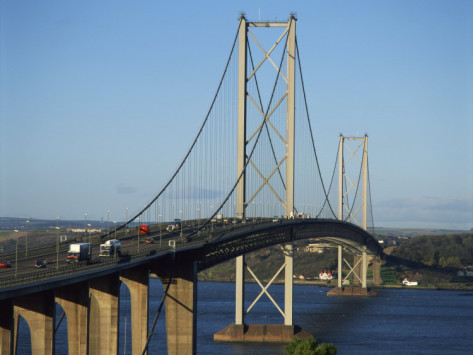 Perhaps Sydney’s city fathers could consider a rebuild along the latter lines, or at least a make-over. I’m sure that with modern computing to help them refine the load calculations, engineers could get rid of half of that ironware and still have the bridge stay up. Just a suggestion.