I was in the capital of Kyrgyzstan, Bishkek, over the last few days, working with some old colleagues on supporting the government to develop a national action plan to minimize the effects on the population of the country’s pollution. Fascinating stuff, but not the subject of this post.

As part of the work, it was necessary to schmooze with the local diplomatic community, preparing the ground for future requests of assistance to deal with the country’s pollution. I therefore found myself one evening attending the event put on by the Dutch to celebrate the King’s National Day. As is customary on such occasions, the Dutch Ambassador made a speech, thanking us for coming, listing the important Dutch-Kyrgyz partnerships, and of course – given the occasion – mentioning the Royal family. He did so in an interesting way. Having mentioned partnerships in the agricultural field, he segued smoothly from this to inform those of us who didn’t know it that carrots were orange because patriotic Dutch farmers had selectively bred this root crop to turn it orange, in honor of William the Silent, Prince of Orange, patriarch of the Dutch Royal family.

Well! This was interesting indeed. As anyone who has even a passing interest in sporting events knows, the Dutch national color is indeed orange. 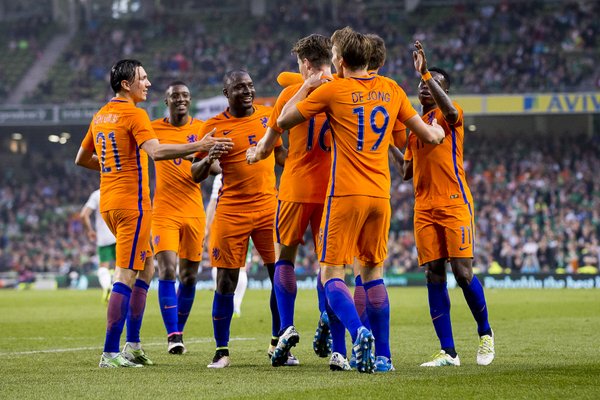 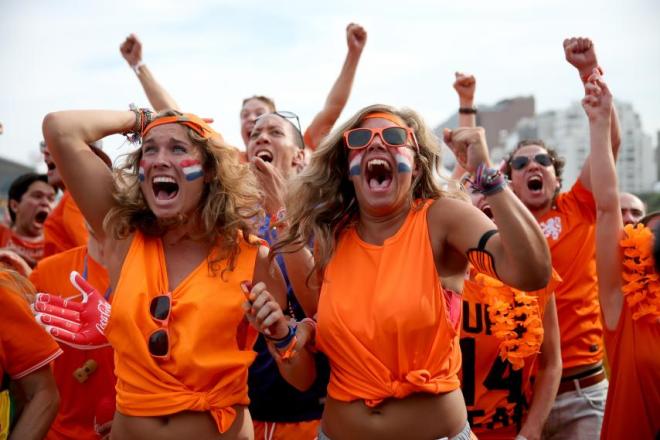 And this patriotic show of orange is indeed linked to William the Silent’s feudal title of Prince of Orange, although the orange in this case is the pretty little town of Orange in southern France, which was William’s fiefdom (and an old Roman city). 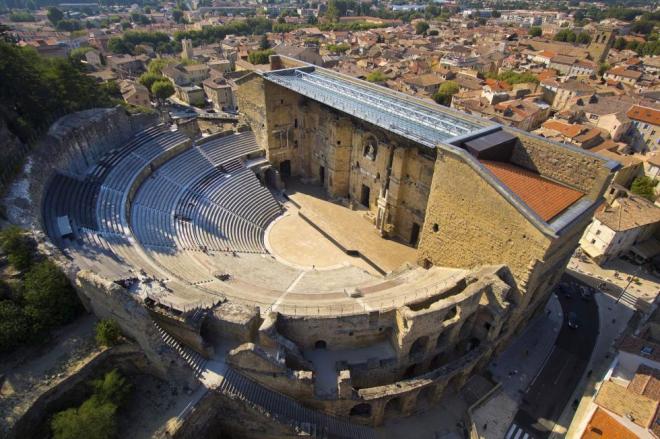 But to say that Dutch farmers had turned carrots orange as a patriotic gesture … Such is the dominance of orange carrots in our supermarkets, groceries, and farmers’ markets that it had never, ever occurred to me that carrots could have been anything but orange! 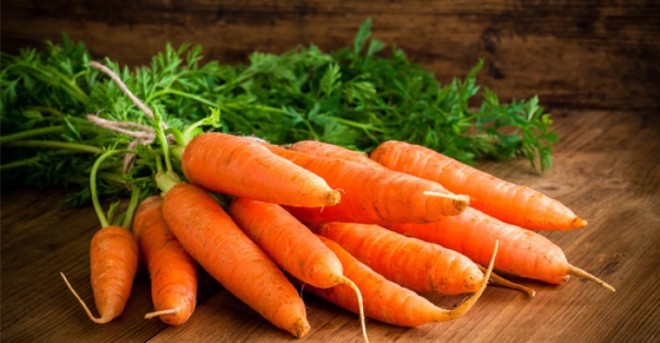 In other posts, I have demonstrated my interest in the humble history of vegetables. The Ambassador had now given me a wonderful opportunity to study the history of the carrot. So these last few days I have been spending time which I should have been more usefully devoting to the pollution problems of Kyrgyzstan to happily digging into the carrot’s history instead. I am now ready to report back.

The first thing I have to say is that the Ambassador was indeed correct in his basic contention, that Dutch farmers had turned the carrot orange. This happened in the 17th Century and, for reasons that I shall explain in a minute, the orange carrot took over the carrot world. But first let me throw in some pictures of different colored carrots:
Purple carrots 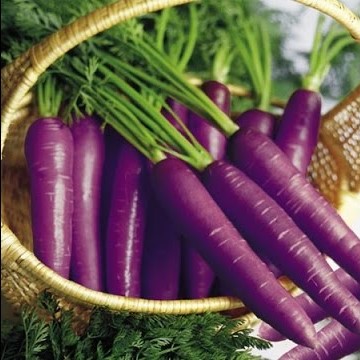 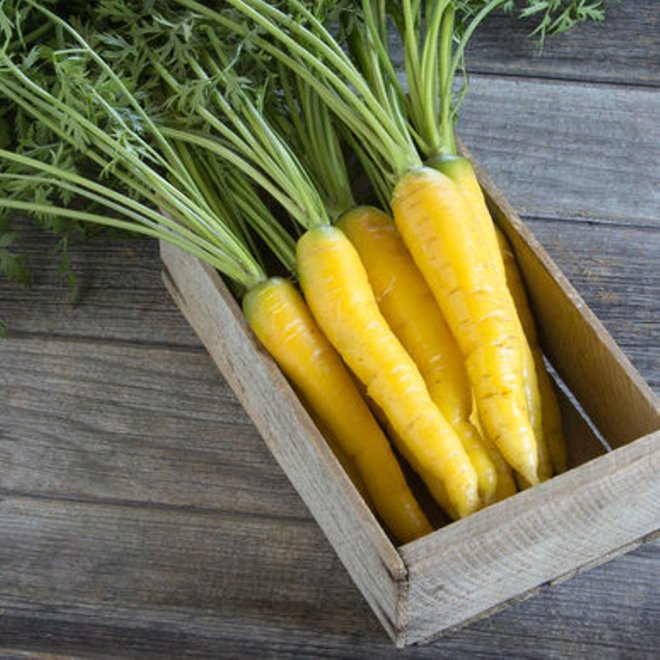 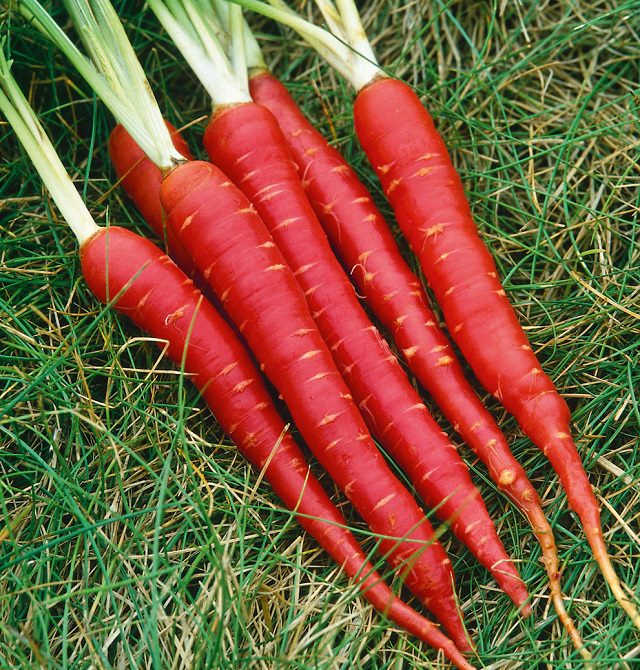 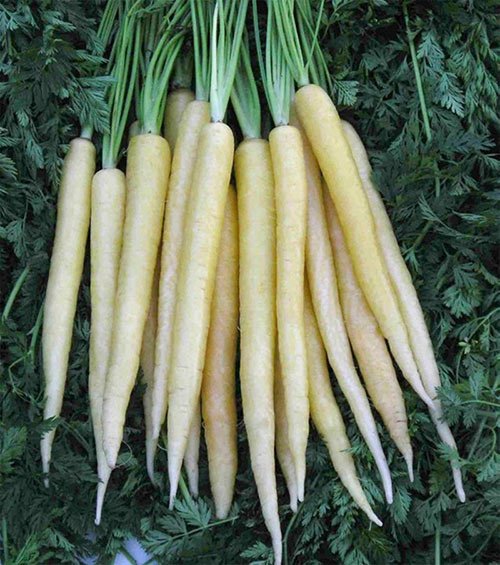 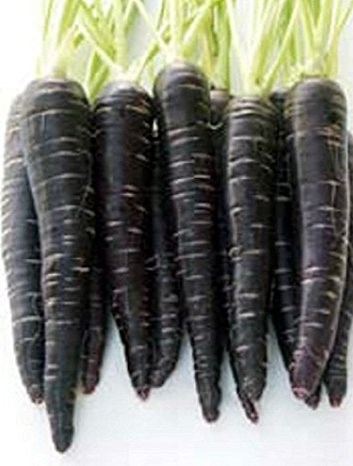 Here we can see all these different carrots in glorious technicolour. 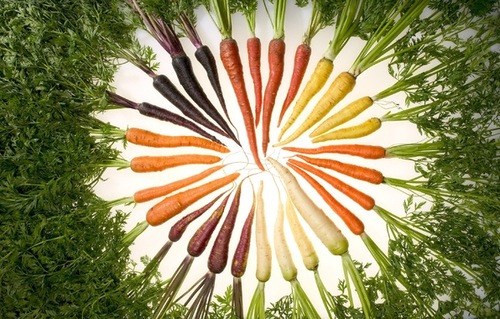 Personally, I have never seen any of these. I suppose they are like heirloom tomatoes: there are some enthusiastic aficionados out there who are growing these in their vegetable plots and trading seeds with other carrot enthusiasts. Perhaps one day, like I’ve seen in upscale Californian supermarkets, there will be a corner of the vegetable section devoted to these – to my eye – strange and wonderful carrots.

But why did the Dutch farmers breed these orange carrots? Here, I have to say that, with all due respect to his august person, the Ambassador seems to have got it wrong (along with 99% of the Dutch population). The farmers did not do it to honor William the Silent and his House of Orange. They were looking to breed carrots which were sweeter and whose core was smaller and less woody. The root of wild carrot is actually quite bitter, so since time immemorial farmers had been trying to breed the bitterness out of the root, and as anyone knows who has eaten a big and mature carrot, its core can take up a good part of the carrot and be disagreeably tough to eat. 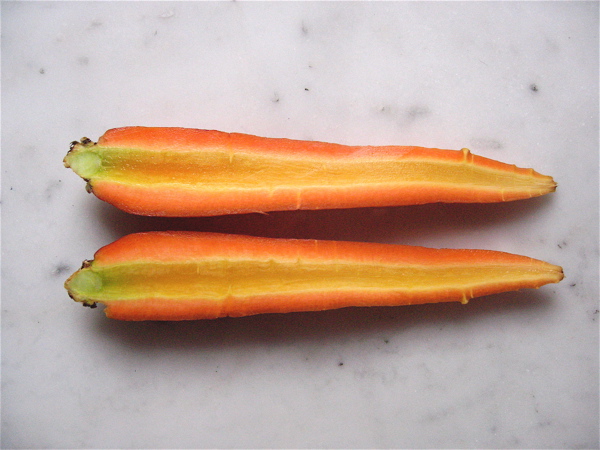 It just so happened that the carrot they bred was orange. I suppose the carotene which gives the carrot its color also gives it its sweetness. It was only later generations of Dutch who saw the political dimension of the carrot’s color, and actually saw it in a negative sense. Dutch burghers of strong Republican sentiment frowned upon carrots because of their too Royal orangeness – in their Republican zeal they also went after other orange plants, discouraging the planting of marigolds for instance. 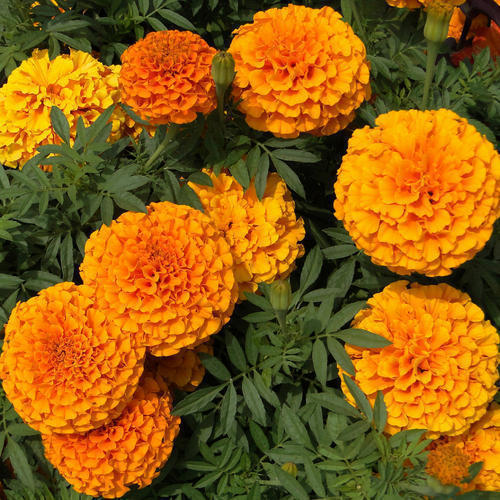 Another example of the politics of color.

Before I leave orange carrots, I should report that analysis of carrot genomes strongly suggest that the Chinese independently bred orange carrots. It pleases me no end to know this, because in my years in China I was always puzzled by Chinese carrots. They somehow seemed different from the European carrots that I was familiar with. I throw in a picture of Chinese carrots to show what I mean. 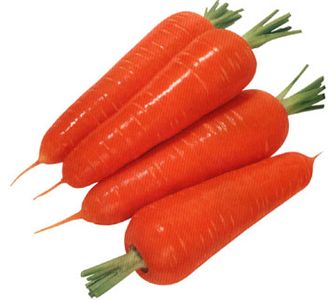 They are a darker orange – the fact that the Chinese obtained the orange color by changing different genes from the ones which give European carrots their orange color probably explains this. And they were much stockier than European carrots, a fact that I put down to the Chinese breeding carrots more as animal feed (like the wonderfully named mangelwurzels) than as human food.

I could not resist the temptation of using this research into the orangeness of carrots to carry out research into the broader history of the carrot. It turns out that the wild carrot is at home in Central Asia – so it is indeed apposite that this little piece of research was kicked off by a chance remark made in Kyrgyzstan, which happens to be one of the homes of the wild carrot. For those of my readers who, like me, have never seen a wild carrot, I throw in a picture. 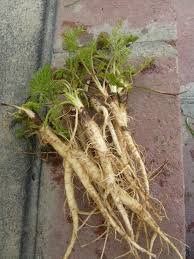 It seems that its root is bitter and woody, but I suppose that hunger makes one tolerant of not-so-tasty food – better than having nothing in one’s stomach. The wild carrot, perhaps in some domesticated form, was carried far and wide from its Central Asian homeland. Carrot seeds have turned up in archaeological digs of prehistoric lake dwellings in Switzerland. 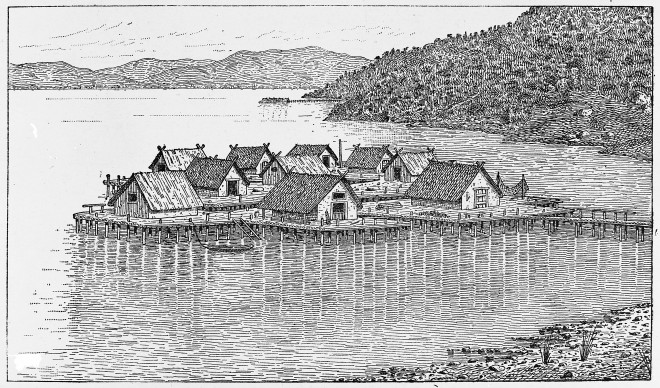 The Babylonians knew of it; it is mentioned in a cuneiform tablet listing the plants growing in the garden of King Marduk-apla-iddina (King Merodach-baladan in the Old Testament). 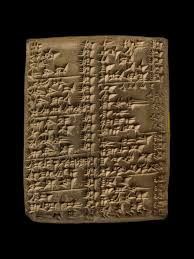 Seemingly, the Egyptians knew of it, although the evidence is rather weak. The Greeks and the Romans knew of it. But in all these cases, it seems that it was the leaves and seeds which they were interested in; the root was too bitter. They used the root or the seeds for medicinal purposes and ate the leaves much as we would eat spinach (I am reminded of a story my mother used to tell us young children, of how during the War, when she was trapped in occupied France, one could not find carrots in the market. Only the leaves were on sale. She and her mother made do and ate those – better than having nothing in one’s stomach).

All this time, our ancestors were tinkering with this foodstuff as they were tinkering with all their foodstuffs. Finally, possibly as early as the 6th Century, one or more farmers somewhere in today’s Iran and Afghanistan bred a carrot with a sweeter, less woody, more edible root. This plant was destined to become the ancestor of all modern carrots. From there, the seeds were carried by passing traders and travelers both east and west, no doubt along the Silk Roads which I have had cause to mention in earlier posts. In the case of its carriage to the west, Arab traders seem to have been the vector after the Arab conquest of Persia in the 7th Century, much as was the case for the lilac bush, the subject of an earlier post. More tinkering and crossbreeding took place in today’s Turkey before a carrot with an even more edible root continued on its journey to Europe. It arrived there in the 10th Century, eventually ending up in Northern Europe in the 13th Century. It came in two colours, yellow and purple, with a rarer white variety thrown in. For some reason, the Dutch got heavily into carrot production and the rest is orange history.

Since the Dutch started this post, let me finish by throwing in some of those still lives so beloved by the Dutch, of kitchens full of vegetables and fruit. Normally, I pass these over with a yawn (I have never understood our ancestors’ fascination with this type of paintings), but it seems appropriate to admire them in this case. I invite my readers to locate the carrot in each of the paintings. 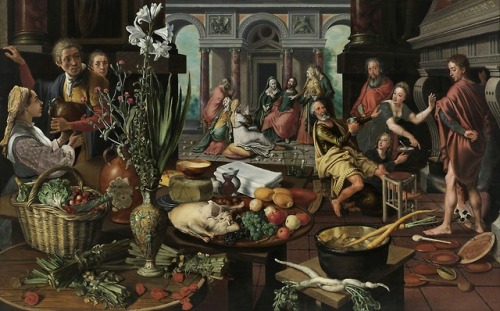 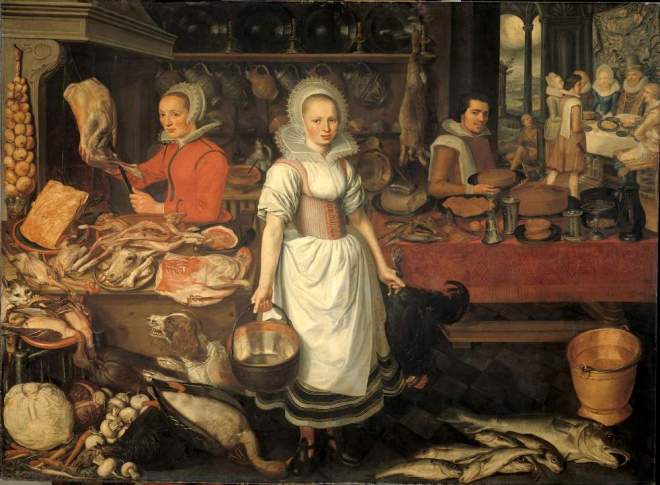 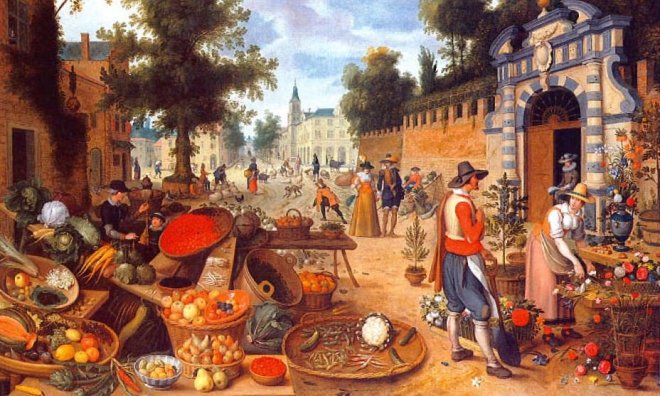