Last week my wife and I visited, together with a French cousin of mine and his wife, the First World War battlefields of Verdun and Chemin des Dames. For me, it was a follow-on to a trip we made a few years ago to the battlefields around Ypres in the British sector. For my cousin, it was a chance to visit Verdun, a battlefield still deeply etched in the French psyche.

As during my previous visit to Ypres, I was struck by how peaceful the countryside now looks. Traveling along the Chemin des Dames, but also on the west side of the River Meuse at Verdun, with their rich rolling farmland on every side, it was difficult to imagine the large-scale death and destruction visited upon these lands a mere hundred years ago. The farmer’s plough has smoothed away the millions of shell holes that pockmarked the earth, wheat and rapeseed cover the land with carpets of green and yellow.

Yet that farmer’s plough still brings to light every year unexploded ordnance and other detritus of war, and by some estimates will continue to do so for seven hundred years.

And it still brings to light remains of men who died in these now peaceful fields.

At Verdun, these will be added to the Ossuary of Douaumont, where the visitor can gaze upon mountains of human bones, German and French alike.

In certain places, especially on the East bank of the River Meuse but also at Mort-Homme and Cote 304 on the West Bank, and at the Plateau de Californie on the Chemin des Dames, the land was too smashed, and too dangerous, to give back to agriculture. There, trees cover the land with their green foliage and birdsong fills the air. But if you peer beneath the tangle of branches, you can see the cratered, pot-holed landscape the trees hide from our view. 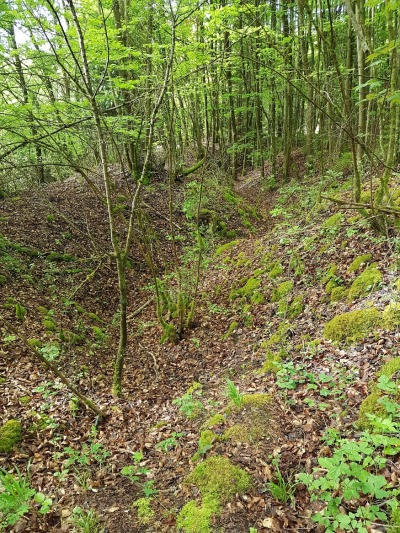 You can begin to imagine what it must have been like for those poor soldiers who cowered there, and fought like savages when they met each other, and died horrible deaths, and whose bodies were ripped into ever smaller shreds by incoming shells.

The official memorials which the French put up in the immediate aftermath of the war ring false to my modern ear: “Glorious Sacrifice!”, “Victory!” Where was the glory in the stinking mud and blizzard of shrapnel? What victory was this which brought us another World War thirty years later? Even that oft repeated phrase “Eternal Remembrance” rings hollow – who remembers any more the individual young men who died here? Their parents are long gone and the last of the soldiers who fought here passed away ten years ago. I find the small, private memorials put up by families whose sons disappeared without trace into the mire of the battlefield much more touching: “Jean Dauly, 350th Infantry Regiment, killed 6th May 1917 in the little wood across the way, aged 20. Mourned by his mother, all his family, and his friends. Pray for him”, “Marcel Duquenoy, from Calais, aged 20, of the 350th infantry regiment. In memory of our son, who disappeared 6th May 1917, in the wood across the way”. As a parent, I can empathize with the agonies of a mother who had lost her son and didn’t have a body to decently bury and a tombstone to grieve over.

The modern iconography is much more sensitive to the sheer, wanton waste of life of this war. There is a superb museum-memorial near Douaumont, which gives a balanced French and German account of the battle of Verdun and shows in great detail the life of ordinary soldiers on both sides. There is a modern sculpture, the Constellation of Suffering, at the museum of the Cave des Dragons on the Chemin des Dames.

It commemorates the 16,000 African soldiers, mostly from the ex-French colonies in West Africa, who were totally decimated in this battle: the ultimate act of colonialism, using colonial troops to fight your wars. And there is of course that iconic picture of Franco-German reconciliation: President François Mitterrand and Chancellor Helmut Kohl holding hands at the annual anniversary of the battle of Verdun in 1984.

You cannot visit World War I battlefields without coming across the military cemeteries both big and small which dot the countryside. I like these cemeteries. They are oases of peace and beauty, but they are also the one place where I can connect, if only for a moment, with the individual men – boys, often – who died in this carnage. I go down rows reading the names. I feel I owe this to them, so that they can exist again for a brief instant before returning to the cold earth. I’m always sorry that I can’t read all the names, there are simply too many and time too short. We visited many French cemeteries, of course

but also the very big American cemetery at Romagne-sous-Montfaucon, product of the Americans’ Meuse-Argonne offensive in 1918 (with so many who died just a few days before the war’s end)

a few small, modest German cemeteries – the penalty of the vanquished leaving their dead in the victor’s country

and a small British cemetery, the result of the frantic rearguard fighting in the first month of the war. 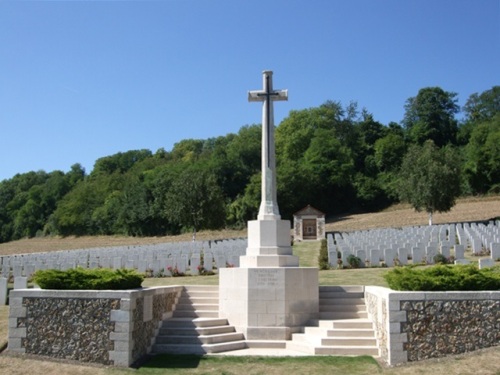 But the cemeteries I most liked were across the road from the memorial chapel on the Chemin des Dames. All the military cemeteries I have ever visited stand in isolation, each country mourning its dead separately. But here, a German cemetery touched upon a French cemetery. They were not side by side – that would have been unthinkable a hundred years ago, perhaps even today – but they touched in one corner, so that you could walk from one to the other. 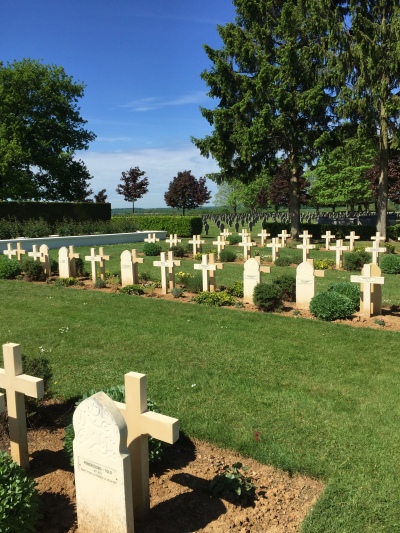 It makes me think of a poem by the French poet René Arcos, “Les Morts…”, “The Dead…”

Here are my very modest efforts at translation:

In the same direction
Does the wind make
The widows’ veils float.

And the mixed tears
Of a thousand pains
Flow into the same stream.
Wedged one against the other
The dead without hate and without flag,
Hair smeared with clotted blood,
The dead, they are all on one side.

In the same clay where come together without end
The world that dies and that which begins
The fraternal dead temple to temple
Expiate today the same defeat.

Clash, divided sons!
And tear Humanity
Into vain rags of territory,
The dead, they are all on one side.

For underground there is
But one fatherland and one hope
As there is for the Universe
But one battle and one victory.

What more fitting monument could there be than these twinned cemeteries for today’s Europe, which sees us inching cautiously closer together, with the goal of making this war (and its successor, the ’39-’45 war) la Der des Ders, as the French called it, la Dernière des Dernières, the absolutely last war.

Photos: ours or our cousins’, except: