So Europe has been abuzz with the story of a little girl – Maria is her name – with the blondest of blonde hair and the bluest of blue eyes, who was found living with a Roma family in Greece. Her sweet little face flashed across all our television screens. 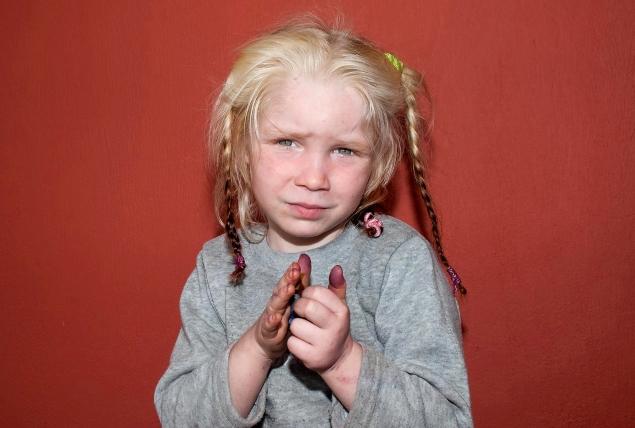 Greek police suspected, based on the lack of physical similarities between her and her supposed parents, that she was not their child.

Of course, there was a racist element in the whole discussion: how on earth could Romani have blonde children? Everybody knows that Romani are dark and swarthy (and shifty and unreliable and of thievish disposition and, and, and …). The obvious corollary was that the Romani had stolen Maria from a “normal” family. There was a certain level of triumphalism when science came along with DNA tests which proved without a shadow of doubt that the Romani who claimed to be her parents were in fact not her parents. So I had to laugh when DNA tests went on to show that actually Maria is a Roma – but from another Roma family in Bulgaria. And her Bulgarian parents look just as dark and swarthy as the Greek “parents”!

And to top it all, as the picture shows, they have other equally blonde children!

It seems that the solution of the mystery is simple enough. All this testing has shown that Maria’s father carries the gene for albinism. So Maria and her other white-skinned, blonde-haired children are albinos.

Actually, when we get away from all the fuss and bother of these last few days along with the borderline racism of it all, there is the deeper, fascinating tale of the Roma people themselves. For some 200 years already, scholars have inferred from the Romani’s language that their original home must have been the Indian subcontinent and more specifically somewhere in its northwestern part (I won’t bore you – or myself – with the details, but it has to do with the fact that the Romani language is clearly a New Indo-Aryan language rather than a Middle Indo-Aryan language, with the closest affinities to the Saraiki linguistic group, which is native to southern Punjab, northern Sindh, Southern Khyber Pakhtunkha and northeastern Balochistan provinces of Pakistan). So how come little Maria ended up in Bulgaria?

To answer that question, it would be nice if the Romani had written histories and other documents which would tell us what happened to them after they had left their original home and, after much wandering, ended up in Europe. But like most marginalized peoples, the Romani have little if any written documents. And so we are left with mentions of their passage – mostly disapproving if not downright hostile – in the documents of the countries they crossed, along with the Romani’s own myths and folklore about their past.

And now we also have genetics.

Modern genetics is amazing. Truly, we carry our history in our cells. Scientists can carefully tease out from those millions of chemicals spiraling in our DNAs our story as peoples. As the biotechnology tools and equipment have grown more powerful – and cheaper – more and more historical information about us is being squeezed from our cells. The Romani are no exception. I have just finished reading a scientific article about a large genetic study recently undertaken on the Romani – the latest of a series. It was pretty hard going, I have to tell you. Here is a sample: “we applied the ADMIXTURE clustering method to estimate the membership of each individual to a range of k hypothetical ancestral populations (k = 2 to k = 15, see Figures 2C, S1D, and S1E). At k = 2, a longitudinal gradient on the amount of ancestry of each component is observed from India to Europe (Spearman’s rho = 0.935, p < 10216, after exclusion of European Romani; Figure S1F)”. Aie-aie-aie! But I ploughed through the article, and this is what I got from it (with some help from a review of the article in Scientific American, I will admit).

We can start with this prettily coloured map.

It shows the strength of affinity between the Romani’s genetic makeup and that of the modern populations of the Indian subcontinent (red, the strongest affinity; blue, the weakest). It tells us that most probably the Romani’s homeland was somewhere in the valley of the Indus River. This fits nicely with the linguistic evidence I mentioned earlier.

I throw in a picture here of one of the modern inhabitants of this part of India, a Punjabi farmer

Many of them are now Sikhs, but take away the turban and other Sikh attributes I don’t suppose the first Romani looked very different from this distinguished gentleman.

Genetics also tell us that it was very probably one group of people who left (rather than a number of groups leaving at different times and mingling over the centuries of their wanderings), and that they left in about 500 AD. Genetics can’t tell us why they left, alas, but a look at India’s history books shows that this was the time when the White Huns conquered the northwestern part of India from the Gupta Empire. Perhaps the Romani’s ancestors wanted to get out of the way of the fighting, or they were on the losing side of the fight and had had their lands taken from them.

Quite soon after leaving, genetics goes on to tell us, this so-called “founder group” went through what geneticists euphemistically call a bottleneck, which is another way of saying that the group’s numbers dropped sharply, in this case by half. Perhaps the White Huns caught up with them, perhaps a local population objected to their presence on their territories, perhaps they were decimated by some infectious disease. We’ll probably never know. In any case, genetics tells us that thereafter they moved quite fast through the Caucasus and the Middle East, mixing only moderately with the local populations along the way.

In about 800 AD, they ended up in Bulgaria; genetics tells us that this was their trampoline into Europe. And there they stayed for some three hundred years, according to the genetics, until about 1100 AD, when they started dispersing throughout the rest of Europe. The genetics can tease out two main dispersal streams, one to Western Europe and the other to Eastern Europe. Something bad happened to the Western European group in about 1200-1300 AD; their genes went through another strong “bottleneck”, equivalent to their losing some 30% of their population. Could it have been the Black Death? But why didn’t the Eastern European Group suffer similarly? The plague struck there too (except in the area of what is now mostly Poland). Again, we’ll probably never know.

Be that as it may, the genes also give us an indication of how much the Romani people have mixed their genes with other people’s as they spread through Europe. Overall, the Romani haven’t mixed much; their genes show more evidence of marriage among blood relatives than is the case with the other European populations (an interesting exception are the Welsh Romani, who seem to have mixed quite a bit). But they haven’t kept completely to themselves. And here there is an interesting difference between various groups of Romani. For instance, Romani from Spain and Portugal, but also from Lithuania, seem to have mixed more readily with the local populations in the past than they have recently. The opposite pattern is seen in the genes of the Romani populations from Slovakia and Hungary in Central Europe, and Croatia, Romania, and Bulgaria, in the Balkans. Here, the Romani kept to themselves for a long time but then more recently have mixed with other populations.

Given our generalized suspicion of Romani and our desire to keep away from them (I remember as a child being told that gypsies would carry you off if you weren’t careful, that you had to keep away from gypsy encampments, etc. etc.), how did any mixing between Roma and non-Roma take place at all? Well, it could have been kidnapping, as was the initial suspicion in the case of Maria. But it could just as well have been a case of Romani women being raped. But more likely it was people who, out of desperation, running away from dire poverty or abuse or some other misery, or out of a love for the open road, joined groups of Romani. And so mixed their genes with those of the Romani.

The Norwegians have theirs. The Dutch have their Woonwagenbewoners (“caravan residents”). The Germans have their Landfahrer (“country drivers”). Germany and Switzerland (but also parts of France and Austria) have had the Jenische.

The Spaniards have their mercheros. And of course there are Show Travellers, all those people who travel around working in circuses, fairgrounds and the like. 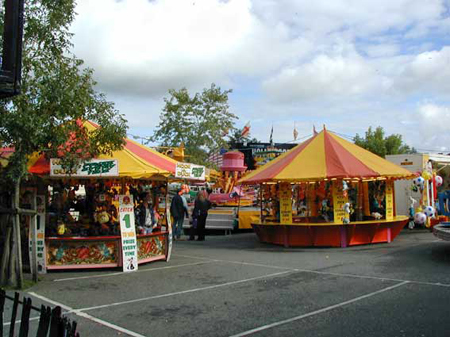 And then we have those who don’t belong to any particular community, who are out on the roads alone, the tramps, who were turned into philosophers by Samuel Beckett in his immortal play Waiting for Godot

Many of these groups formed through poverty and desperation. But fascinatingly enough, the urge to make for the highway hasn’t died down, even in our rich, modern societies. We now have New Age Travellers, who travel between musical festivals and similar happenings. 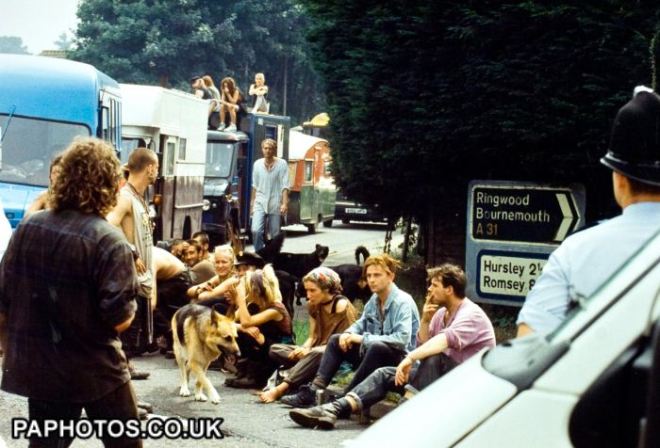 This last photo, with the policeman standing guard, says everything about the relationship us settled people have with the travellers. We view them with suspicion, bordering on fear. These people are shifting, rootless, not only physically but morally. They are dangerous. It was ever so, the relationship between the settled farming communities and the travelling herders of the plains, the grasslands, of the wide-open spaces. Why, even the Bible has its story of this difficult, often violent, relationship between the two peoples, in the story of Cain and Abel. Cain was the settled farmer, Abel was the wandering shepherd. Cain was jealous of Abel, who seemed to enjoy God’s favour more, and he killed him. 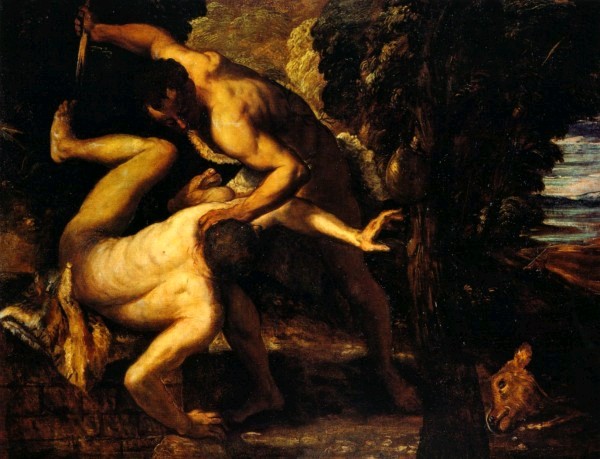 Yes, we fear them and have pushed them further and further to the fringes of our societies. But they despise us. I rather like the term Show Travellers use to describe us settled folk: Flatties. Yes, I suppose our lives are flatter for not being out on the road.

NOTE: I thank Andrew for correcting a fundamental mistake I made in the original post. I had not picked up on the fact that our little Maria is in all probability an albino.